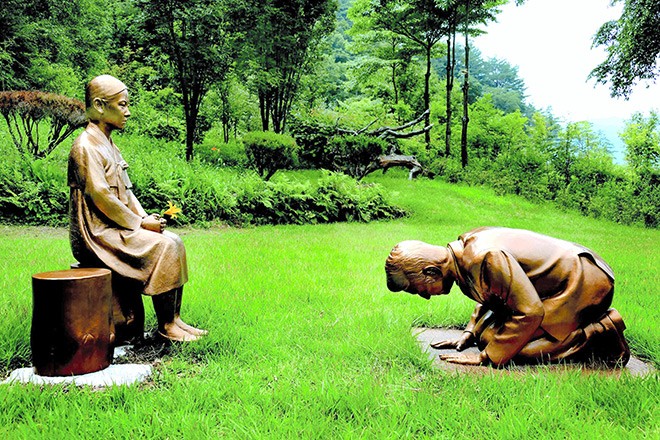 SEOUL--A pair of statues erected in an idyllic botanical garden in South Korea look set to reignite a furor with Japan over the contentious wartime "comfort women" issue.

The Korea Botanic Garden in Pyeongchang, in the country's northeastern Gangwon Province, announced the unveiling of the statues titled “A Heartfelt Apology” on July 26.

One statue is of a girl sitting on a bench representing women forced to provide sex to wartime Japanese soldiers. The other is of a man, representing Prime Minister Shinzo Abe, kneeling and bowing before the girl.

“There are many statues of the little girl (representing comfort women), but I wanted to create a statue of a responsible person apologizing,” Kim Chang-ryul, the head of the garden, told The Asahi Shimbun.

The statues were completed in 2018. The garden, operated by a private company, was closed due to a fire, but reopened in June this year.

To mark the restart, the garden had planned to hold an unveiling ceremony of the statues with just staff members in attendance. The garden also announced to make them available for the public to view.

However, the ceremony was canceled, the garden said on July 27.

Chief Cabinet Secretary Yoshihide Suga said at a news conference in Tokyo on July 28 that he had not verified the report of the statues, but issued a strongly worded statement all the same.

“It is unacceptable on the basis of international courtesy," he fumed. "If the report is true, it will have a decisive impact on Japan-South Korea relations.”

A South Korean official involved in foreign diplomacy said the government was not in a position to intervene in an action undertaken by a private party.

However, the official said it “acknowledges the need to consider international courtesy concerning foreign leaders.”

News of the statues generated a mixed response in South Korea.

“It will create diplomatic friction and cause even decent Japanese to raise their eyebrows at us,” one person wrote online.

“Let’s make a mini version of the statues that all of us can carry,” said another.