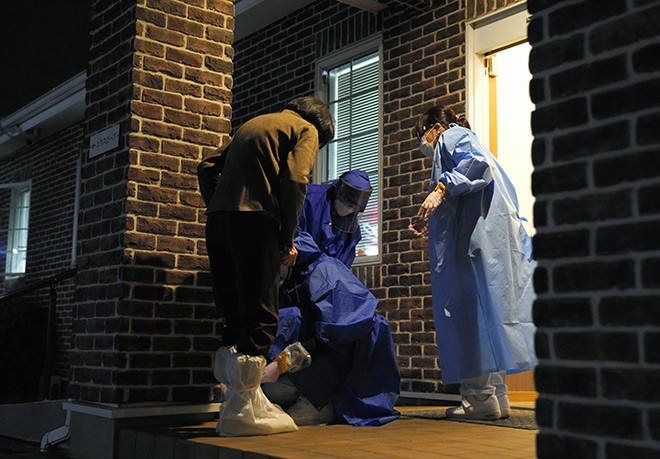 Medical staff wearing raincoats as a substitute for protective gear put plastic bags over the shoes of a patient to reduce the risk of virus infections at a hospital in Yokohama in April. (Asahi Shimbun file photo)

FUNABASHI, Chiba Prefecture--Two nurses at a local hospital tested positive for the novel coronavirus, one of whom likely caught it after an infected patient refused to wear a face mask, according to the Funabashi city government.

Municipal authorities announced July 28 that the nurses, who work at a ward for COVID-19 patients in Funabashi Municipal Medical Center, both tested positive for the virus.

Several days before developing symptoms, one of the nurses, who is in her 30s, spent about 30 minutes chatting with an elderly patient infected with the virus about his condition during the hospital admission procedure.

The patient appeared upset and refused to don a face mask. The nurse was wearing a mask and protective gear at the time but was too busy to add a face shield. The city government said she likely became infected while dealing with the patient.

The second nurse, who is in her 20s, also tested positive for the virus after chatting with her infected colleague during lunch at the hospital just before the other woman developed symptoms.

Both women and the girl reportedly only have mild symptoms.

The medical center has accepted 60 or so COVID-19 patients since March. But this is the first time any of its healthcare workers tested positive for the virus.

“It was extremely regrettable that infections occurred at our hospital,” said Takashi Maruyama, director of the center. “We’ll continue to take thorough infection prevention measures.”