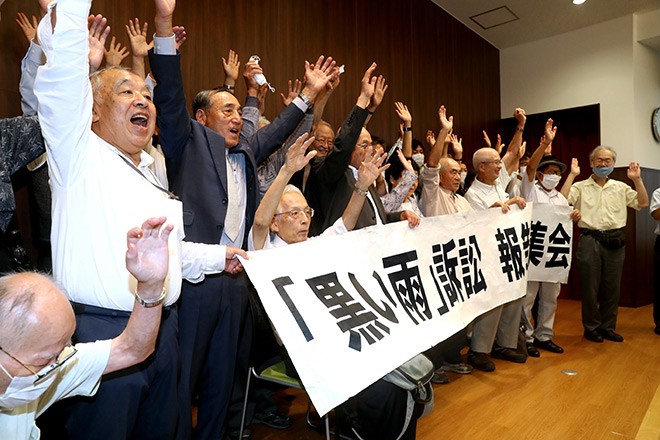 Plaintiffs and their lawyers celebrate the Hiroshima District Court ruling on July 29 recognizing them as hibakusha due to "black rain" that fell after the atomic bomb was dropped on Hiroshima on Aug. 6, 1945. (Koichi Ueda)

HIROSHIMA--After a five-year legal battle, a court has recognized 84 plaintiffs exposed to radioactive “black rain” as atomic bomb survivors for the first time.

The ruling lands just a week ahead of the 75th anniversary of the atomic bombing of Hiroshima during World War II.

The plaintiffs are now eligible for free medical treatment and other benefits, and are celebrating their long-awaited recognition as hibakusha, survivors of the atomic blast.

Their lawsuit, filed in 2015, challenged the central government’s position that defined and limited who could be considered hibakusha because of the black rain that fell on Hiroshima shortly after the atomic bombing on Aug. 6, 1945.

“The ruling was groundbreaking because it severely criticized the present structure for administering relief to hibakusha and called for a major revision,” said Masahiro Takemori, a lawyer for the plaintiffs.

The government had maintained that the only people eligible were those who lived in an area delimited by local meteorologists where they said heavy rain fell.

The 84 plaintiffs in the lawsuit, including bereaved family members who took over for original plaintiffs who died before the ruling was issued by the Hiroshima District Court on July 29, all lived outside of the area classified as where the heavy rain fell.

The original plaintiffs were between 4 months to 21 years old when the bomb fell on Hiroshima.

The central government created a special provision in 1976 that recognized people as hibakusha if they were in the designated heavy rain area, as defined in a 1945 study.

The study, which was based on conversations with locals, determined that black rain fell in the region extending in a northwesterly direction from ground zero. It covered an area of 15 kilometers east to west and 29 km from north to south.

Of that area, one part measuring 11 km east to west and 19 km north to south was defined as the heavy rain region. But the outlying area was considered to have been hit by less rain.

The district court ruling said the 1945 study could be considered a document useful in inferring the range where the black rain fell.

But it said the views expressed by experts, used by the plaintiffs to argue the area was much wider than the government’s interpretation, were also important evidence.

In 2008, the Hiroshima prefectural and municipal governments conducted a joint study of about 37,000 residents. It concluded there was a possibility black rain fell on an area about six times the size of the defined area that the central government used to determine if an individual qualified as hibakusha.

The ruling described the standards for recognizing hibakusha as “lacking in rationality” because the definition was based on where they were at the time, and for how long the black rain fell in the area where they lived.

The court pointed out those people could have become exposed to radiation not only externally through the black rain, but also internally by ingesting water that had been contaminated by radiation.

For that reason, the court asked all the plaintiffs to submit their medical records and explain where they were at the time. Based on that testimony, the court ruled there was nothing unnatural or irrational about their statements that said they had been out doing farm work or were otherwise outdoors during the rain.

The court also considered whether the plaintiffs developed any of the 11 diseases, such as cancer, that are normally used to recognize hibakusha.
Based on those two considerations, the court said all 84 plaintiffs should be recognized as hibakusha.

RULING TOO LATE FOR SOME

Masaaki Takano, 82, who headed the group of plaintiffs, thanked the court for its decision. Takano said starting July 31, they will lobby the central and local governments named as the defendants to abandon any appeal.

But one individual who was not at a gathering of the victorious plaintiffs after the ruling was Masayuki Matsumoto. He was one of the leaders of the plaintiffs before his sudden death in March, at the age of 94.

Matsumoto convinced close to 60 individuals to sign on as plaintiffs in the lawsuit. Many said they only joined because of what he told them.

About another 10 original plaintiffs died over the course of the five-year trial.

But those alive and present when the ruling was read out expressed joy at finally being recognized as victims of the black rain.

For many years, Takashi Ishii, 83, was denied recognition as a hibakusha because he lived in an area where only a little rain fell.

Ishii was 8 when it fell on him and five of his friends. The group was playing in a river about 27 km northwest of ground zero. At first, they laughed at the sight of each other with their faces and heads covered in black.

But health problems haunted Ishii from the time he was still in elementary school. Not only did he develop asthma, but when he was 15, he suffered from skin inflammation on his back and muscle swelling that forced him to have three surgeries.

He continued to require hospital care, which made it difficult for him to hold a steady job. He felt terrible for not being able to properly provide for his wife and two children.

He was diagnosed with prostate cancer and had the gland removed when he was 70.

During the trial, Ishii at times felt so weak that he fainted in the courthouse restroom. He needed a cane and the support of his wife, Kyoko, to attend the court sessions.

Of the five friends he played with that fateful day, four died before the lawsuit was filed. The only friend who joined him in the suit died of cancer in late 2019.

When he heard the ruling, Ishii said, “I shouted in my heart, ‘We won.’

“I wanted my friends also recognized as hibakusha caused by the black rain.”

(This article was compiled from reports by Hiraku Higa, Yuto Yoneda and Akina Nishi.)