As numbers thin, hibakusha ask who will warn of nuclear war 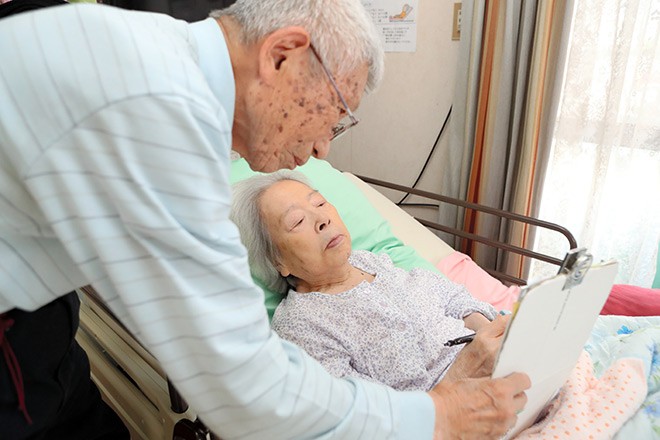 Yasuo Nakamoto holds a pad so his wife, Masako, can write on it at their home in Hiroshima. (Koichi Ueda)

Bedridden and barely able to move, Masako Nakamoto, 97, tried to explain why she agreed to talk with a reporter from The Asahi Shimbun to express her views on the elimination of nuclear weapons.

After asking for a pen using body language, she spent about 10 seconds to write, “I want to convey” my experiences, her hand shaking.

Nakamoto has had greater difficulty moving since suffering a cerebral infarction in January. But she still feels it vital to pass her experience on to future generations so the world never again use nuclear weapons, as the United States did on Aug. 6, 1945, when it bombed Hiroshima.

When the blast occurred, Nakamoto was working at a factory manufacturing uniforms and shoes for the Japanese military. The factory was located 2.7 kilometers from ground zero.

After the atomic bomb was dropped, the factory was converted into a facility to care for the thousands who were injured.

It was a nightmare scene of sweat, dust and human excrement. The groans of those hanging on to life and other aspects of the scene at the factory led the poet Sankichi Toge to pen a work in which he called for a return of human beings.

Witnessing so much suffering, Nakamoto vowed to become a doctor. There were days when she could barely get up, likely due to the effects of radiation, but she delivered about 2,000 babies as an obstetrician-gynecologist.

Speaking about her experience as a hibakusha, she described the aftermath of the atomic bomb as “hell on Earth,” and urged that efforts be made to never let such a tragedy occur again.

But her failing health led her to stop her activities for peace from about two years ago.

She is now cared for by her husband, Yasuo, 93, at their home in Hiroshima’s Nishi Ward.

A questionnaire sent out by The Asahi Shimbun to hibakusha around Japan, including Nakamoto, prior to the 75th anniversary of the atomic bombings of Hiroshima and Nagasaki, found that many respondents were ambivalent about whether their efforts to pass on their experiences were working.

At issue is how to ensure that the stories of hibakusha survive, given that the average age of those that lived through the bombings is now 83.31 years.

Even among the hibakusha, there was a significant gap about whether they still recalled vividly the bombings in 1945 on Aug. 6 in Hiroshima and Aug. 9 in Nagasaki.

Among those in their 80s, 86.9 percent said they clearly remembered the events of that day.

But among those in their 70s, the figure dropped sharply to 14.8 percent. In that age bracket, 44.8 percent said they had no recollection whatsoever of the atomic bombings.

That difference means there are fewer people who can describe the horrific circumstances immediately after the bombs exploded.

Makoto Yoshishige, 76, who now resides in Tokyo’s Bunkyo Ward, wrote, “There is a need for those who were still young children when they survived the atomic bombing to make greater efforts. While we may only be able to talk about what others said about the actual bombing, we can talk about how we went on living after the bombing.”

Some people have taken it upon themselves to serve as “memory keepers” even though they may not have personal experience with the atomic bombings.

One who offered much praise was Yoshiko Yanagawa, 91, of Hatsukaichi, Hiroshima Prefecture, who wrote, “I can only thank them deeply for their efforts to pass on the message to future generations after coming to understand our requests.”

Kuniyoshi Soejima, 74, who resides in Ashiya, Hyogo Prefecture, wrote, “Nothing would be shared if we started saying only those who actually experienced it will understand.”

The narrow difference in opinion about whether their experiences were being passed on to future generations may have left some hibakusha worried about what should be done.

Mieko Ono, 78, of Fukuoka city, wrote, “I hope that as many opportunities are given to hibakusha to talk about their experiences. There will not be enough time unless we hurry.”

But others said talking about such experiences was extremely worthwhile.

Keiko Inagaki, 89, of Nagoya, wrote about talking about her hibakusha experience and added, “While almost all of the listeners said it was their first time to hear about such things, they were very serious in listening to me. I want to pass on my experiences on other occasions in various parts of Japan.”

Noboru Katayama, 88, of Hino in western Tokyo, wrote, “Rather than a tale from the past, it is important to grasp the issue as one that is the most important for living in today’s world.”

Sachiko Kikkawa, 79, of Hiroshima touched upon how much rebuilding had taken place and wrote, “With the city so beautiful, it is difficult to imagine the tragic scene from 75 years ago. Relics from the atomic bombing should be left behind as one way to transmit what happened.”

The respondents held a much more pessimistic view about whether their experiences had reached an audience outside Japan.

A combined 57.1 percent said their experiences had not been passed on to a foreign audience, while only 33.2 percent said it had.

When asked if the world was moving toward eliminating nuclear weapons, 55.6 percent of respondents answered “No,” while 62.1 percent said there was greater danger over the past five years of nuclear weapons being used in the world.

Kikue Shintaku, 90, of Tokyo’s Adachi Ward, wrote, “When I view the current situation in the world, my only feeling is that it is very regrettable and I hold nothing but a deep sense of despair.”

About the only positive development in recent years toward eliminating nuclear arms was the July 2017 passage at a U.N. meeting of the Treaty on the Prohibition of Nuclear Weapons.

Koji Ueda, 78, of Hachioji in western Tokyo, wrote, “I confirmed the passage over the internet late at night and the faces of my late seniors who offered me so much help returned in my memory and I wept by myself.”

Among the hibakusha in the survey, 71.4 percent said Japan should ratify the treaty.

But the government has so far taken no action, in part, because it relies on the U.S. nuclear umbrella for providing greater national security.

As a result, only 11.3 percent of the respondents said Japan was aggressively seeking the elimination of nuclear weapons, while 79.8 percent felt it has not done enough.

Yuriko Sadakiyo, 81, of Kobe, wrote, “Japan should be the first nation to ratify because it is the only one to be hit by atomic bombs. It is an embarrassment to not have Japan ratify it.”