Only photo of Fukuchiyama Castle in feudal age causes a stir 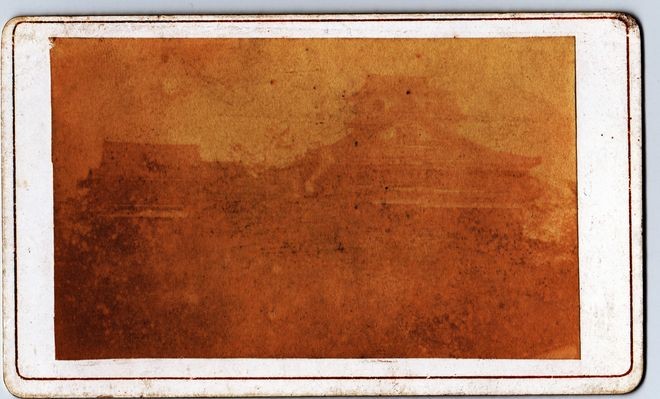 The donjon of Fukuchiyama Castle is shown in an old photo after the contrast level was adjusted. (Provided by Mitsuru Shima)

FUKUCHIYAMA, Kyoto Prefecture--Tinged and faded with age, a photo has emerged that is the only known example of a feudal-era fortress here that was demolished under a Meiji government edict to tear down castles.

The mounted photo of Fukuchiyama Castle is printed on albumen paper and was taken at a time when photography was in its infancy. It was spotted on an auction website by 38-year-old eagle-eyed castle model enthusiast Mitsuru Shima of Yanagawa, Fukuoka Prefecture, in early July. It measures 51 millimeters by 84 mm.

Fukuchiyama Castle, commissioned by warlord Akechi Mitsuhide (1528-1582), was demolished after the edict was issued in 1873.

The photo is the only one known of Fukuchiyama Castle before it was dismantled.

One historian called the find “a first-class record in studying the history of the castle.”

He put down a rebellion in Tanba around what currently is the central part of Kyoto Prefecture in 1579, and ordered a castle to be erected in Fukuchiyama around that time to replace one that had previously existed.

After Mitsuhide effectively betrayed and killed his lord, Oda Nobunaga (1534-1582), in the Honnoji Incident in 1582, and then perished the same year, the rights of the castle’s ownership transferred to someone else.

The donjon and other parts of the fortress were refurbished and expanded around 1600.

When the prefectural system was introduced in lieu of feudal domains in 1871, the Army Ministry became responsible for 200 castles of domain lords across Japan, including Fukuchiyama Castle.

Because the ministry was not able to use all the castles as army camps, or for other purposes, it was decided in 1873 to demolish many of them.

In the case of Fukuchiyama Castle, nothing remains except for the stone foundations of the main keep and a few other sections.

The keep was rebuilt in 1986 following a spirited campaign by city residents and others who went on a fund-raising drive.

The new structure was based on a ground plan developed during the Edo Period (1603-1867) as there were no known images of what it had looked like.

Shima, noting that the structure in the image closely resembles the replica castle, purchased it for 223,000 yen ($2,100).

He sent a photo of the image on albumen paper to the JCII Camera Museum in Tokyo’s Chiyoda Ward, which concluded it was taken in the early Meiji Era (1868-1912).

Shima has created models of castles by sketching out plans based on old images and other records of the structures.

The albumen paper had turned yellowish, blurring the image, so Shima adjusted its brightness level on a computer screen to better depict the donjon’s roof and outer walls. Shima said the locations of windows on the top fourth floor, as well as the arrangement of parts with verandas, are all the same as those in the original ground plan.

Masayuki Miura, professor emeritus of fortress architectural history at Hiroshima University, speculated the photo was very likely taken immediately before the castle was dismantled as few castle images dating to the earliest stage of the Meiji Era have been found.

“The donjon design of Fukuchiyama Castle in the ground plan from the Edo Period shows extended first and second floors as well as the relatively small third and fourth floors,” said Miura. “A smaller donjon stands on the left side of the main keep.”

Some experts had questioned whether the ground plan upon which Fukuchiyama Castle was rebuilt accurately reflects the design of the original castle, but the newly found image suggests otherwise.

“The ground plan design is consistent with that in the old photo in every detail,” he said. “It confirmed that the castle was replicated virtually accurately.”

(This article was written by Rikako Takai and Takehiko Yokoyama.)