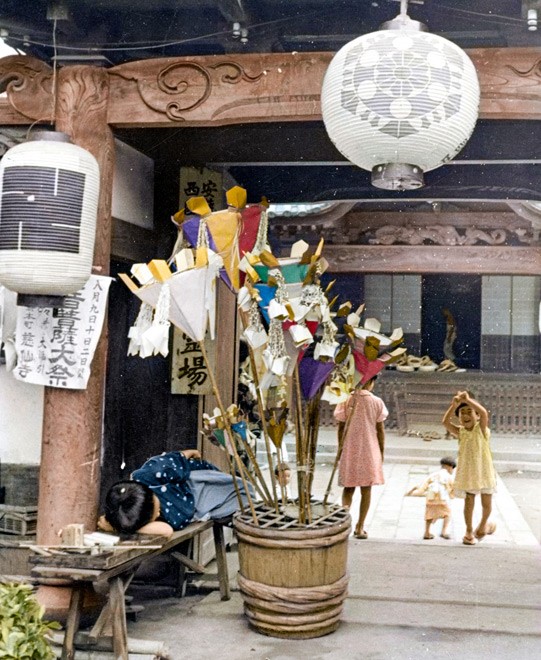 A colorized picture that captures children on the grounds of Jisenji temple and lanterns. The original black-and-white photo was taken on Aug. 9, 1936, in Hiroshima’s Naka Ward. (Provided by Kioku-no-kaito Project)

In a new photobook, a girl, wearing a short dress and sporting a bobbed hairstyle, has a big grin on her face.

Another little girl next to her stares at something at her feet.

On a bench near the children, a woman sleeps with her head on her arm.

The photo was taken on Aug. 9, 1936, on the grounds of Jisenji temple, which was located in the area where the Hiroshima Peace Memorial Park now stands.

It captures a peaceful moment right before the Bon holiday break.

What sets the photograph apart are the vivid colors, like it was shot just yesterday.

It's one of the 355 monochrome pictures taken in Hiroshima and other cities during the period before, during and after World War II that a group of university professor and students have compiled into a book.

Using artificial intelligence (AI) and conducting interviews with survivors and others, the group has colorized the black-and-white photos. Memories and imagination worked hand in hand in making the colors true to life.

LIFE BEFORE THE ATOMIC BOMB

Anju Niwata, 18, a freshman at the University of Tokyo, obtained the pre-war black-and-white photo of the little girl on the temple grounds in Hiroshima in March.

Niwata, who was born in Hiroshima, spent a week in June colorizing the photo. First she downloaded the image into a personal computer, then used AI to colorize it.

The picture captures a displayed lantern, an essential item for people in Hiroshima during the Bon, a mid-summer Buddhist festival to welcome the souls of the dead.

The tradition is still strong in Hiroshima, so Niwata did not need AI’s help to color the particular item. She manually colored it in yellow and red.

Niwata, however, was unsure what colors she should use for patterns drawn on hanging paper lanterns.

She asked Tokuso Hamai, 86, who used to live near the temple.

“The lantern was blackish because it was hung there all through the year,” Hamai told her.

For the children’s clothing, Niwata searched the internet to find the trend and social mood at the time to choose the colors.

At first, Niwata felt that these subjects captured in the monochrome photo were “people from the past.”

But once the colors were added, she felt as if they were living today.

“I realized there was a normal life back then, no different from ours today,” Niwata said.

Niwata began interviewing atomic bomb survivors and collecting signatures for nuclear abolition in 2017 when she was a first-year student at Hiroshima Jogakuin Senior High School.

Through the activities, she met Hidenori Watanabe, a University of Tokyo professor, who has led the projects called Nagasaki Archive and Hiroshima Archive.

The projects use 3-D maps on the internet and feature oral testimonies from atomic bombing survivors and pictures to document the atrocities over the maps.

Watanabe, 45, taught Niwata a technique to use AI to colorize monochrome wartime pictures.

The process involves interviewing people captured in or related to these images.

When asked about a photo, an interviewee seemed to suddenly start remembering details vividly. It was as if their memories that had been frozen for a long time were suddenly unfrozen and thawed out, Niwata said.

Most of the pictures for the photobook were taken in Hiroshima. But the group contacted news media archives and added pictures taken in wartime Tokyo, Osaka and Fukuoka, among other areas.

Such a widespread search made Niwata and others quickly realize that only a few pictures taken in the hypocenter area of Hiroshima have survived to this day.

For the book, Niwata and others made an effort to select pictures capturing daily life and normal moments, such as children eating watermelon and parading a float with a chimpanzee.

“I want people to realize how a war can embroil ordinary people’s everyday lives,” she said.

“After reading the book, they may start asking their grandparents about the war, hopefully,” she said.