Nagasaki school board declines again to back A-bomb event 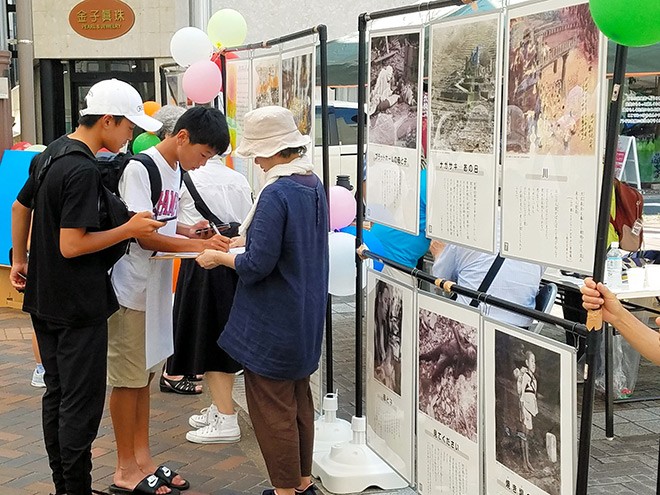 Staff ask for signatures to support the elimination of nuclear arms at an annual photo exhibition in Sasebo, Nagasaki Prefecture, in August 2019. (Asahi Shimbun file photo)

SASEBO, Nagasaki Prefecture--The city education board here has again refused to support a photo exhibition showing the destruction from the atomic bomb on Aug. 9, 1945.

The date this year marks the 75th anniversary of the attack on Nagasaki by U.S. forces.

The board formally declined to sponsor the exhibition on July 29, saying that a signature-collecting campaign on site at the event violates internal regulations.

The group hosting the exhibition had asked the city government for sponsorship as well. But the city denied the request the same day.

The annual photo exhibition, which started in 2017 when the United Nations adopted a treaty banning nuclear arms, has been hosted by an association mainly comprising the Sasebo council opposing atomic and hydrogen bombs.

The group is expected to hold the exhibition on Aug. 8.

As they have in the past, members of the group will conduct a petition campaign calling all nations to sign the treaty to abolish nuclear weapons during the event.

The school board last year found the petition campaign problematic and declined to sponsor the event.

The board said cooperation with the campaign would compromise its politically neutral status.

It also declined to offer sponsorship in 2017. In 2018, the board was not asked to back the event.

This spring, the board revised its internal regulations regarding sponsorships and added that “a project that involves a signature-collecting activity is excluded” from sponsorship opportunities.

Nagasaki Governor Hodo Nakamura has signed the international petition, along with most municipal heads in the prefecture.

However, Sasebo Mayor Norio Tomonaga has yet to sign it.

“This is the 75th anniversary of the atomic bombing of Nagasaki,” said Keiko Maekawa, a board member of the organization hosting the exhibition, slamming Tomonaga for not signing it. “As the head of a municipality in Nagasaki Prefecture, it is shameful.”