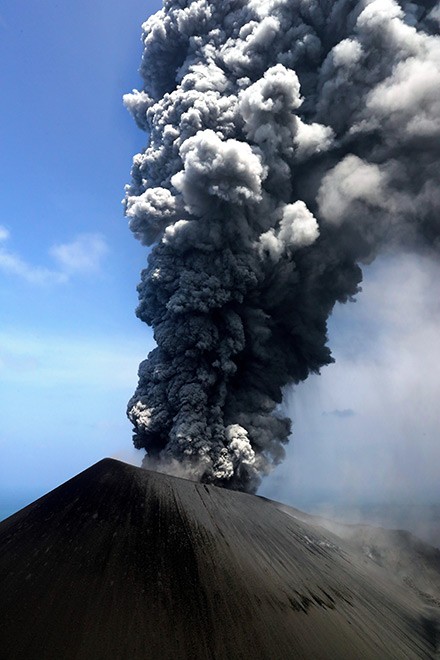 Continuing volcanic activity on remote Nishinoshima island that flared more than six months ago shows no sign of abating.

Nishinoshima is part of the Ogasawara island chain about 1,000 kilometers south of Tokyo.

An Asahi Shimbun aircraft on July 30 captured footage of the volcanic activity. A gray plume of smoke spewing from the crater was seen rising to a height of 3,000 meters.

The island's rough-looking black lava landscape was replaced with brownish ash from the volcano that appeared to be several meters thick.

A massive eruption in 2013, the first in about 40 years, according to the Japan Coast Guard, dramatically increased the size of the island.

Volcanic activity there waned in summer 2018, but resumed in late 2019.

On July 4, the island spewed a volcanic plume 8,300 meters high, the biggest ever observed.

In the past six months, the island, particularly its northern part, has increased in size.

Setsuya Nakada, director-general of the Center for Integrated Volcano Research at the National Research Institute for Earth Science and Disaster Resilience who was aboard The Asahi Shimbun aircraft, said lava was actively flowing until early July.

“But the magma activity weakened and underground water flooded the volcanic vent. The magma suddenly cooled and broke into pieces. Now it is being spewed out as volcanic ash,” Nakada said.