Thinking about reducing danger of nuclear war amid a pandemic 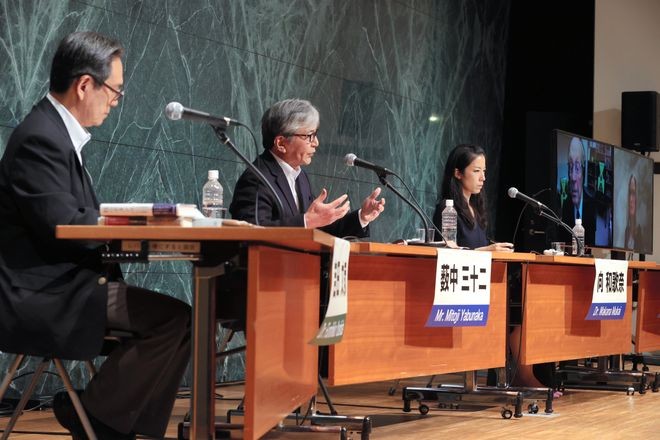 Japanese panelists join two Americans via a videoconferencing system to take part in the International Symposium for Peace in Nagasaki on Aug. 1. (Minako Yoshimoto)

The global threat posed by the novel coronavirus pandemic offers a renewed opportunity to assess ways to accelerate the push for nuclear disarmament, according to panelists in an international symposium held on Aug. 1.

This year’s International Symposium for Peace, “The Road to Nuclear Weapons Abolition: Steps Ahead in Global Danger,” had the specific theme of “100 Seconds to Midnight,” a reference to the Doomsday Clock, which this moved to the closest it has ever been to mankind's annihilation since it was established in 1947.

Jointly sponsored by the Nagasaki city government, the Nagasaki Foundation for the Promotion of Peace and The Asahi Shimbun, the symposium was held at the Nagasaki Atomic Bomb Museum Hall.

No audience was in attendance as a precaution against the spread of the new coronavirus.

The pandemic struck in the year marking the 75th anniversary of the atomic bombings of Hiroshima and Nagasaki in 1945.

William J. Perry, the former U.S. defense secretary who gave the keynote speech, and Rachel Bronson, the CEO of the Bulletin of the Atomic Scientists that manages the Doomsday Clock, had both initially planned to visit Nagasaki and Hiroshima to take part in memorial events.

However, the pandemic forced them to abandon plans to visit Japan and to take part in the symposium through a videoconferencing system.

In his address, Perry said: “Today we still face the danger of a nuclear conflict. Our real danger is from an accident, such as responding to a false alarm, or a political miscalculation. Neither is likely, but both have happened; and when they did, we avoided a nuclear catastrophe by intelligent people making intelligent decisions; but also by good luck. The survival of our civilization should not depend on our continuing to have good luck.”

He explained that his work toward abolishing nuclear weapons reached its peak in April 2010 with the agreement by the United States and Russia to a New Strategic Arms Reduction Treaty (START), but that developments thereafter left him pessimistic about achieving the goal in his lifetime.

Perry has set up a nonprofit organization with the primary goal “to educate the public on the nuclear danger and propose specific actions we can take to reduce those dangers.”

He said among such actions were not allowing the U.S. president to have sole authority to launch a nuclear attack, re-initiating and extending various international agreements on nuclear weapons and having the United States make a no-first use pledge regarding nuclear weapons.

Bronson took part in the subsequent panel discussion along with Mitoji Yabunaka, a former vice foreign minister who is now a visiting professor at Ritsumeikan University in Kyoto, and Wakana Mukai, a lecturer of international relations at Asia University’s Faculty of International Relations.

Yabunaka said, “Japan should take the initiative to lobby the nuclear powers to reduce their nuclear arsenals as they are obligated to do under the Nuclear Nonproliferation Treaty.”

Bronson explained the decision by her organization to move the Doomsday Clock to its closet point to midnight.

“We have seen influential leaders denigrate and discard the most effective methods of addressing complex threats--international agreements with strong verification regimes--in favor of their own narrow interests and political gain," she said. "By undermining cooperative, science- and law-based approaches to managing the most urgent threats to humanity, these leaders have helped to create a situation that will, if unaddressed, lead to catastrophe sooner rather than later.”

Mukai called on nations such as Japan, South Korea and NATO members that fall under the nuclear umbrella provided by the United States to also take action to lower the danger from nuclear weapons by “urging the nuclear powers to pledge no-first use of nuclear weapons.”

The issue of the pandemic was also pointed to as having an impact on discussions of arms control.

Perry said the novel coronavirus pandemic could have the “silver lining” of putting pressure on government leaders to cut back on spending on nuclear weapons given the huge economic damage the pandemic has had on nations around the world.

While Bronson said the pandemic was “taking away space for discussions of arms control,” she also observed that the nuclear weapons issue had been of greater concern among those taking part in this year’s primaries to select the Democratic Party nominee to take on U.S. President Donald Trump.

She added that given Trump’s decision to abandon the Intermediate-Range Nuclear Forces Treaty and the uncertain future of New START, Joe Biden, the presumptive Democratic nominee, could very easily differentiate himself from Trump by focusing more on nuclear issues during the presidential campaign.

With the failure of the Trump administration to push forward negotiations to denuclearize North Korea, the panelists were asked what could be done to reduce the nuclear threat from Pyongyang.

Perry described the difficulties he faced in talking with North Korean officials after serving as defense secretary under President Bill Clinton and added that the situation now was very different because his goal was to get Pyongyang to agree to not build a nuclear arsenal.

Perry added that with North Korea now possessing nuclear weapons it is “very unlikely that it will give up its nuclear arsenal, so we should focus on how to make them not use it.”

But Yabunaka said that given the obvious threat Japan faces from North Korea’s nuclear arsenal, the government should take greater action to hold negotiations to convince Pyongyang to reduce the number of its nuclear weapons.

He added that a regional approach would be important in pushing forward the process but expressed doubts about whether the United States and China could be convinced to work together, given the increasing level of distrust between those two powers.

As for other steps that Japan could take to work toward a reduction of nuclear weapons, Perry urged Tokyo to not oppose a no-first use policy by the United States should a new administration make a decision to move in that direction.

He added, “Japan should continue serving as a conscience to the world against nuclear weapons.”

Pointing to the importance of individual action, such as wearing face masks and social distancing, in preventing the spread of COVID-19, Bronson said that such individual action should also be used to urge government leaders to act on nuclear weapons.

The symposium began with the showing of a video message from Mikhail Gorbachev, the former Soviet president.

He told symposium participants that “as representatives of civil society, we must oppose a nuclear arms race and stand at the forefront of the movement to reduce the number of nuclear weapons possessed and work toward the ultimate goal of eliminating all nuclear weapons.”