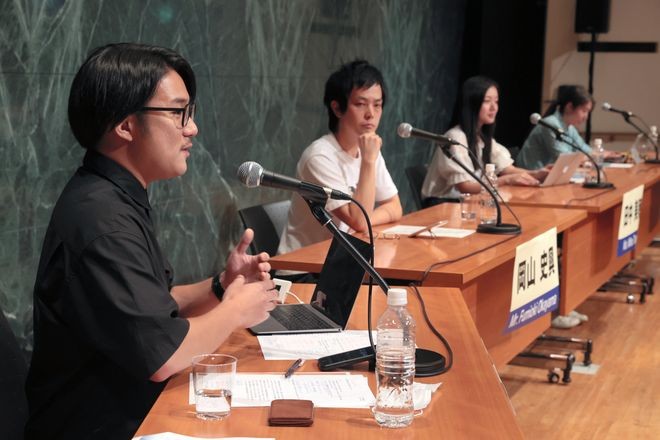 The panelists at a special talk session of the International Symposium for Peace held in Nagasaki on Aug. 1 are, from left: Mitsuhiro Hayashida, Fumioki Okayama, Miho Tanaka and Hanako Mitsuoka (Minako Yoshimoto)

Sharing an average age of 83, a pressing issue for many atomic bomb survivors, or hibakusha, in Hiroshima and Nagasaki is how to pass on their experiences to future generations.

Four young Japanese gathered in a special talk session of the International Symposium for Peace, “The Road to Nuclear Weapons Abolition: Steps Ahead in Global Danger,” on Aug. 1 for a frank exchange of some of the problems they faced in their various activities linked with advancing peace efforts in the nuclear age.

All were under 40 and became involved in peace activities through either personal ties to hibakusha or getting to know them in the course of their studies or work.

A major theme of the talk session was how to continue with peace efforts for the next 25 years until the centennial of the atomic bombings.

Mitsuhiro Hayashida, whose grandparents are hibakusha, was involved in organizing a petition drive started in 2016 known as the Hibakusha Appeal that has so far gathered more than 11 million signatures.

Fumioki Okayama is president of the internet media company 70seeds Inc. that was established in 2015, the 70th anniversary of the dropping of the atomic bombs on Hiroshima and Nagasaki.

Born in Nagasaki, Okayama’s company has been involved in the creation of internet archives related to hibakusha from around Japan to pass on their message.

Miho Tanaka had no ties to either Nagasaki or Hiroshima until she was assigned by her company to its Hiroshima office.

After becoming involved with the Japanese branch of the International Campaign to Abolish Nuclear Weapons (ICAN), which won the Nobel Peace Prize in 2017, she set up and now serves as joint head of a Hiroshima group of young people who want to learn more about nuclear issues.

Since March 2019, the group has been interviewing Diet members from Hiroshima Prefecture or with other ties to the prefecture to seek their views on nuclear policy. The group has passed on what it has learned to voters through social media.

A major trigger to starting the group was meeting with Setsuko Thurlow, a hibakusha and key member of ICAN.

The four agreed that they all found it difficult to gain the empathy that is more readily shown toward hibakusha, especially after they talk about the horrific experiences they endured.

Hayashida added that while many young people may become involved in such activities while they are still students and can work as volunteers, they often decide to leave the groups because of difficulties in trying to make a living through such endeavors.

The other three also pointed to the difficulties of trying to cover costs of their group’s activities by, for example, charging for tours of sites related to the atomic bombings.

Although often criticized for trying to raise funds in this way, they said that unless some way was found to help cover costs it would be very difficult to continue such activities over a long period.

The four also touched upon the possibility of using advanced technology to communicate with a wider range of people.

Tanaka’s group has started using augmented reality technology to provide images of some of the iconic sites related to the bombing of Hiroshima to allow not only young Japanese, but people from around the world to gain access.

The panelists also spoke about a common problem facing young people today: a vicious and anonymous backlash over social media about their activities.