Not the end of the world: Dad’s lesson on son’s Down syndrome 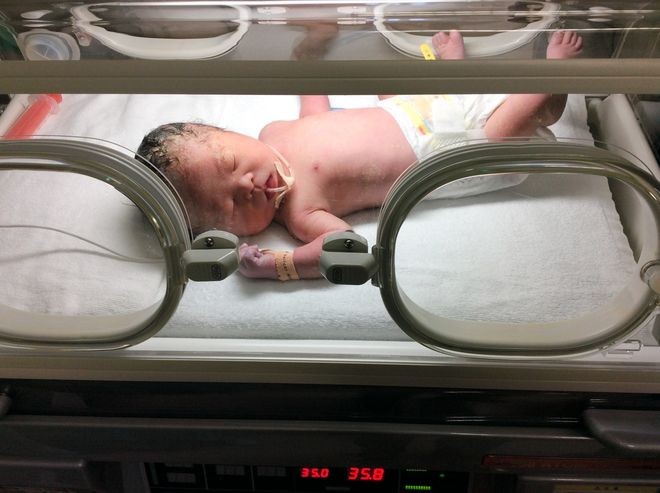 Junichi Nishimura's world fell apart when doctors informed him that his first-born would have Down syndrome.

“I can't tell you the shock I felt when I was told. It was as if my head was being held down with a lump of iron,” Nishimura, 46, recalled in an interview with The Asahi Shimbun.

Morose and sitting on a sofa in the hospital waiting room following the consultation, Nishimura was consumed by dark thoughts.

“We will be an unhappy family," he told himself. "We will end up committing collective suicide.”

Numerous blogs from other parents who had faced the same situation offered no solace, either.

Although the blogs intended to provide encouragement for parents about the grapple with the challenges of raising a child with the chromosomal disorder, Nishimura was unable to "connect" with the posts.

His feelings have markedly changed since his son, Jugo, was born. Nishimura  said his heart now lights up when he sees his son smile.

His story seems particularly relevant at a time when the Japan Society of Obstetrics and Gynecology is planning to allow more medical institutions to offer noninvasive prenatal testing (NIPT). The procedure involves studying the blood of a pregnant woman to evaluate the risk of abnormalities in the fetus.

Nearly 90 percent of parents choose abortion after learning that their child will be born with Down syndrome.

In September 2016, a doctor handed Nishimura a sheet of paper stating that there was a more than 99 percent chance of Down syndrome. Amniotic fluid testing (AFT) showed that the fetus had three copies of chromosome 21, instead of the usual two.

Nothing had prepared Nishimura for that moment. It came as a huge shock. That was when his thoughts turned suicidal.

Nishimura's wife underwent infertility treatment before she conceived at the age of 40.

Twelve weeks into the pregnancy, the couple received an explanation about NIPT, “just in case,” as Nishimura put it.

The NIPT procedures can only point to the possibility of abnormalities, so it takes an AFT to get a definitive diagnosis. The doctor told the couple that the probability of a miscarriage was one in 300 if they went ahead with an AFT.

Even if the child had Down syndrome, it posed no risk to the lives of the baby or its mother, the couple was told. They opted not to take the NIPT and accept whatever the outcome.

The pregnancy, meantime, proceeded without a hitch. But more than 30 weeks into the pregnancy, an ultrasound scan picked up duodenal atresia in the fetus.

The doctor explained that duodenal atresia is a common disease among children with Down syndrome. The probability of the child having it was put at 30 percent.

The couple decided to play the odds.

As his wife's delivery date approached, the volume of her amniotic fluid became unusually large. This was because of the duodenal atresia buildup in the fetus. It was decided to insert a needle into her abdomen to drain the amniotic fluid.

It was just “in passing” that the couple took the AFT, because the amniotic fluid would have had to be drained anyway.

The test results were printed on the sheet of paper handed to them by the doctor.

After the diagnosis sunk in, Nishimura read reams of blogs by parents raising children with Down syndrome.

One blogger wrote, “I am happy that our child was born.” Another said, “Childcare can be fun.”

Cyberspace was awash with similar sentiments, but Nishimura was rarely able to take them at face value.

Nishimura first set eyes on his son, who was born through Caesarean section and being cared for in an incubator, on the afternoon of Oct. 7, 2016.

His son's eyes were wide open, but what startled Nishimura was that the boy was not bawling his head off as he assumed all babies do. Instead, his son was gazing at his surroundings without a murmur.

“I had no idea if all babies are more or less like that, or if our son was like that because he has Down syndrome,” Nishimura said.

Nishimura recalled how his son was sleeping peacefully in the neonatal intensive care unit one night when he suddenly burst out crying. Nishimura's body shook the moment he heard that low cry.

“I will do whatever I can do for this little one,” he thought at the time.

The shock was way more intense than what he experienced when he was first given the diagnosis.

“I suddenly felt I would be able to get along with this little one,” Nishimura said. “I heard him cry, and that allowed me to be confident in myself.”

Jugo's development was slow going, but he became able to walk by his third birthday. He now has a passion for dancing to the tune of Sakanaction, a popular rock band, and to songs from children’s TV programs.

Jugo, always smiling, is a favorite at the childcare center that he attends, Nishimura said.

“I think it’s a good thing that there will be more medical institutions that can offer a proper diagnosis,” Nishimura said. “I still hope, though, that there will be a mechanism for making sure that fewer people will be shocked like I was when they are informed that their children have Down syndrome.”

After talking to others in the same situation, Nishimura had the impression that parents who learned of their children’s disorder only after they were born are shocked more than those who learn about the condition beforehand.

“I think my wife and I were getting prepared, little by little, starting from the time we were told about the 30-percent probability,” Nishimura said. “I hope to see more people agreeing to take the tests for the positive reason that doing so would allow them to be prepared emotionally.”

He named his son Jugo, which means 15 in Japanese, after the uniform number of Hiroki Kuroda, then pitcher for the Hiroshima Carp professional baseball team, which emerged victorious in the Central League for the first time in 25 years immediately after Nishimura was told about the Down syndrome diagnosis.

Kuroda was injured but persevered, and finally made a comeback. He was also fortunate enough to be in the company of caring colleagues and experience the team’s victory.

“I hope my son will also have an opportunity to be lucky enough to have the company of good friends and come out victorious,” Nishimura said. “He could be like that just any one year, if not throughout his whole life.”