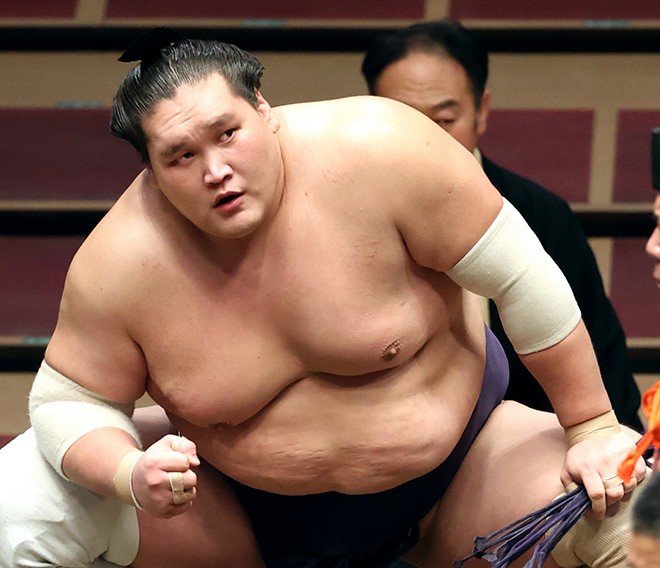 No. 17 maegashira Terunofuji reacts after the referee declares his victory over sekiwake Mitakeumi on Day 15 of the July Grand Sumo Tournament on Aug. 2 at Tokyo's Ryogoku Kokugikan.(The Asahi Shimbun)

Rank-and-filer Terunofuji completed a remarkable comeback on Aug. 2, winning his first sumo championship after about five years full of injuries, disease and thoughts of retirement.

The No. 17 maegashira made short work of sekiwake Mitakeumi on the final day of the 15-day July Grand Sumo Tournament at Tokyo’s Ryogoku Kokugikan to finish with a 13-2 record.

“I am so happy to have continued with sumo,” Terunofuji, 28, said in an interview after his win.

Once an ozeki, Terunofuji entered the tournament in the top division for the first time in two and a half years.

The Mongolian won his only other Emperor’s Cup about five years ago. But his ranking then plunged when he was forced to skip many tournaments because of knee injuries, diabetes and other illnesses.

At the spring tournament last year, he fought in the second lowest division, the first wrestler to do so after competing in the elite division.

Terunofuji conceded that he had told his stablemaster that he wanted to quit sumo because of his long battle with injuries and disease.

But he stuck it out and, despite being upset by sekiwake Shodai on Aug. 1, clinched the Emperor’s Cup by easily pushing out Mitakeumi.

“I have kept going because I wanted to repay the kindness of people who always supported me during the time my career hit bottom,” he said. “I believed that one day, I would be able to smile like this.”

New ozeki Asanoyama finished with a 12-3 record after defeating Shodai on Day 15.

Yokozuna Hakuho was unbeaten and appeared invincible until Day 10. But he then suffered two straight losses and dropped out of the tourney on Day 13 with a knee injury.

Another yokozuna, Kakuryu, withdrew from the tournament after Day 2.

The July tourney was the first grand sumo tournament held in four months since the May event was canceled because of the novel coronavirus pandemic.

The tournament was moved to Tokyo’s Ryogoku Kokugikan from the traditional host venue in Nagoya to reduce the risk of infection during travel.