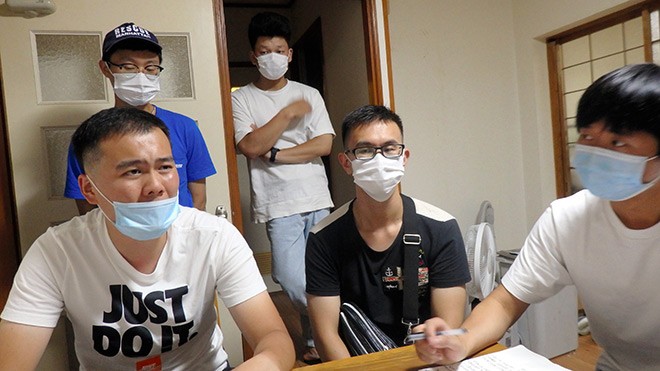 Nearly 20,000 foreign technical intern trainees, many of whom have completed their programs and now have limited sources of income, have been stuck in Japan because of overseas travel restrictions imposed during the pandemic.

Some of those who have been forced to stay in Japan longer than expected say their former employers’ indifference is adding a sting to their plight.

The latest count of 19,600 as of July 24 represents an increase of about 6,000 from the number in mid-June, when the Immigration Services Agency of Japan began collecting such data.

About 410,000 foreign technical intern trainees are staying in Japan for the program that spans three to five years. That means the number of trainees unable to return to their home countries because of travel restrictions will only grow in the months ahead.

Technical interns are sent to businesses in Japan via supervising organizations.

After a maximum of five years, the trainees lose their visa status and are required to return to their home countries. The supervising organizations pay for the costs of the return trips.

But it is unclear who should cover their living expenses between the time their training ends and the date of their departure from Japan.

And for many, that period is lengthening as the pandemic continues to rage.

Some trainees have sought assistance from the supervising organizations and their former employers but said the responses are insufficient to overcome their financial woes.

After their flight was canceled due to the pandemic, they turned to a local labor union for help. Negotiations were held with their supervising organization and Futaba Industrial, which is based in Okazaki, Aichi Prefecture.

Futaba Industrial, a large company listed on the First Section of the Tokyo Stock Exchange, agreed on a temporary arrangement to pay the former interns 10,000 yen ($94) each as living expenses for two months.

The company’s reasoning was that a person would need 150,000 yen to survive for two months. From the figure, it subtracted the 100,000 yen in the government’s coronavirus-relief handouts and 40,000 yen for allowing them to remain in a company dorm.

Liu Zhen, who had worked at a Futaba Industrial factory for about three years, said he was frustrated by the company’s indifference to the difficulties facing the former interns.

“I could not believe it when the company said during negotiations that it is under no obligation to help because you have already quit,” Liu said.

After their flight was canceled, some of them cut their meals to twice a day to scrape by.

Futaba Industrial and the supervising organization agreed to pay an undisclosed sum to the Chinese as a gesture of sympathy partly because the issue of their hardship was raised in Diet discussions.

A Futaba Industrial official said the manufacturer reviewed their living and other expenses. The former trainees are all scheduled to return to China in August.

But others who worked at smaller employers are facing more dire conditions.

A 32-year-old Vietnamese who was a technical intern at a small auto parts manufacturer in Hyogo Prefecture now lives with three others in an apartment in Osaka.

Their rent and utility bills are covered by their supervising organization, but the four must use their own money to buy food.

Vietnam has reduced the number of flights from Japan to around two a month while cutting passenger numbers to give priority to elderly travelers and embassy staff.

“We don’t know when we can return to Vietnam or how long our money will last,” the Vietnamese said.

Yoshihisa Saito, a professor of labor law at Kobe University, called on the government to alleviate the pain of foreign technical intern trainees because Japan has taken them in as a policy to address labor shortages.

The system of accepting foreign technical intern trainees began in 1993. The program has secured cheap labor from developing countries for Japanese industries plagued by a chronic labor shortages.

“If they cannot return to their country, the Japanese government should grasp their situation and ensure assistance will be provided so that they will not fall into difficulty,” Saito said.