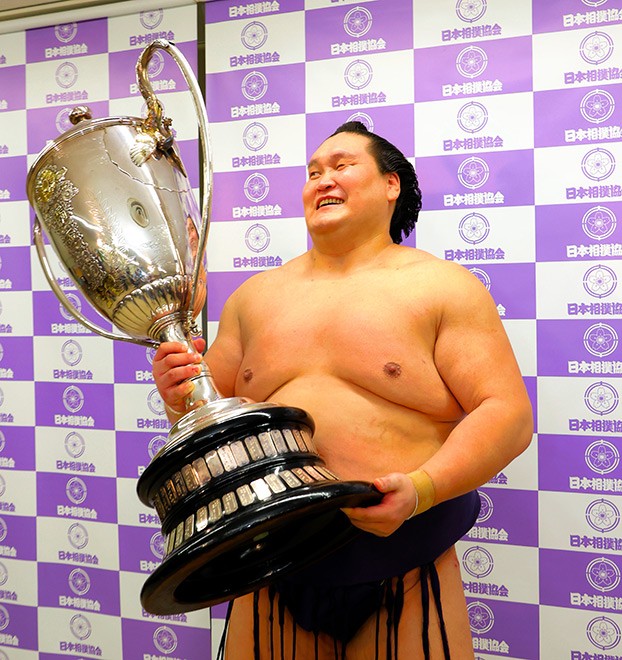 No. 17 maegashira Terunofuji lifts the Emperor’s Cup after winning the July Grand Sumo Tournament in Tokyo’s Ryogoku Kokugikan on Aug. 2.

Rank-and-filer Terunofuji did not foresee success at the July Grand Sumo Tournament. After all, injuries and illnesses had left him a shell of himself as a sumo wrestler who was once seen as a future yokozuna.

“Frankly speaking, I had not expected to earn that many wins,” the No. 17 maegashira said at an online news conference on Aug. 3, a day after he won the tournament at Tokyo’s Rygoku Kokugikan. “I believed that the results would follow if I (focused on) one win a day.”

The 28-year-old Mongolian won 13 bouts against two losses to clinch the Emperor’s Cup and complete a comeback from years of obscurity in the lower ranks.

He also said the condition of both knees, whose injuries have plagued his career, deteriorated in the second half of the 15-day tournament.

“I could not stretch my knees,” he said. “But I have gotten used to being in trying situations. Every morning, I stirred myself.”

On the night after he clinched the second championship of his career, Terunofuji and the Isegahama stablemaster hugged each other.

During the low point of his career when he was stricken with injuries, Terunofuji had begged for permission to retire from sumo. But each time, the stablemaster told him to concentrate on healing first.

“I worked very hard on my part, but I could only achieve this thanks to the unwavering support from the stablemaster and the people around me,” Terunofuji said.

After he won his first championship about five years ago, many in the sumo world believed he was a leading candidate for elevation to yokozuna.

But right after his promotion to ozeki, the second highest rank, he injured his right knee and his career hit the skids.

He suffered more injuries, including the other knee, as well as diabetes and hepatitis. He underwent operations on both knees and skipped four entire tournaments.

He was demoted from ozeki, a ranking that had earned him more than 2 million yen ($18,900) a month, to the second lowest division where wrestlers are not paid.

However, he kept returning to the ring in that division, where spectators were scarce.

Terunofuji said those days brought about a change in his approach to sumo.

When he won his first championship, he described his attitude as: “If I cannot do it, then who can?”

But he broke from that way of thinking a long time ago.

“I take things one day at a time and work very hard, believing that the results will just follow,” he said.

In the latest tournament, Terunofuji was fighting in the top division for the first time in two and half years.

He plans to resume training on Aug. 5 to prepare for the tournament slated for September. He will likely return to the top division with a higher rank.

He said he knows he has no time to rest on his laurels.

“I should retrain myself, otherwise my prospects for the next tournament will be tough,” Terunofuji said. “I will do my best where I can.”

(This article was compiled from reports by Yu Iwasa and Kenichi Hato.)