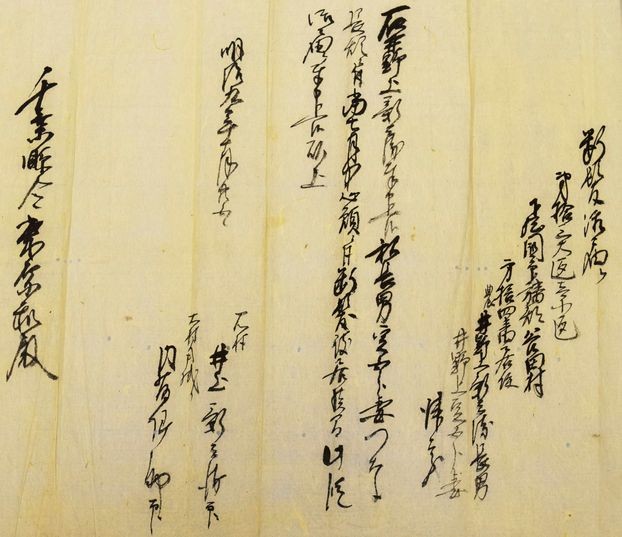 A document believed to be a copy of a report to prefectural authorities notifying them in 1876 that a woman had her hair cut. It was discovered at a private residence in Shiroi, Chiba Prefecture. (Osamu Mikuni)

SHIROI, Chiba Prefecture--A woman gets a haircut here and then reports doing so to the local authorities, as all women must, along with the reason for altering her appearance.

Her reason better be good, or she'll face punishment for transgressing societal norms since only men are allowed to cut their hair freely.

The scene is recorded in a newly found document nearly 150 years old that one resident submitted to justify her decision to deviate from her standard chignon bun hairstyle.

The document turned up during a recent study of archives kept at the residence of the Inoue family, one of the oldest households in Shiroi city's Yata district. The study was carried out by the Shiroi municipal board of education.

The Meiji government in 1871 issued an edict allowing men to freely choose their own hairstyles, letting them decide whether to continue to knot their top-hair, a practice dating back centuries, or cut their hair short.

The order was designed to promote the Westernization of Japan just after it emerged from more than 200 years of national isolation under the feudal rule of the Tokugawa Shogunate.

But women were not permitted to switch to short hair without a convincing reason and had to maintain an elaborately done chignon bun otherwise.

Women were punished if they failed to report they had changed their hairstyles to local authorities.

Atsushi Totani, a member of the Shiroi board of education, hailed the document's discovery as a testament to an era when women had limited options.

“It is a valuable find that illustrates the prevailing value of the time that women should adhere to the traditional notion of beauty,” he said.

In the paper dated Oct. 25, 1876, the woman’s father-in-law and other relatives reported that she had her hair cut in July as part of a religious ritual to pray that she would recover from a lengthy illness.

The document is believed to be a copy of one submitted to prefectural authorities, given that it bears no seal.

After the 1871 edict was issued, a number of women, in addition to men covered under it, also rushed to have their hair cut short in order to be freed from the burden of maintaining the chignon.

It reportedly required half a day for women to complete washing their hair because the chignon was firmly constructed using a large amount of oil.

Many women at the time were lucky if they could wash their hair once a month, even in summer. As a result, it was not uncommon for them to develop headaches due to the foul smell of their hair.

Despite the toll this had on many women, public opinion was largely against them wearing their hair short.

In 1872, the Tokyo metropolitan government enacted an ordinance prohibiting women from wearing their hair short without a having special reason for doing so, alongside a ban on men urinating in the street and getting tattoos.

"I suspect that she was prompted to pray in July because the summer heat was exacerbating her poor health," Totani said.