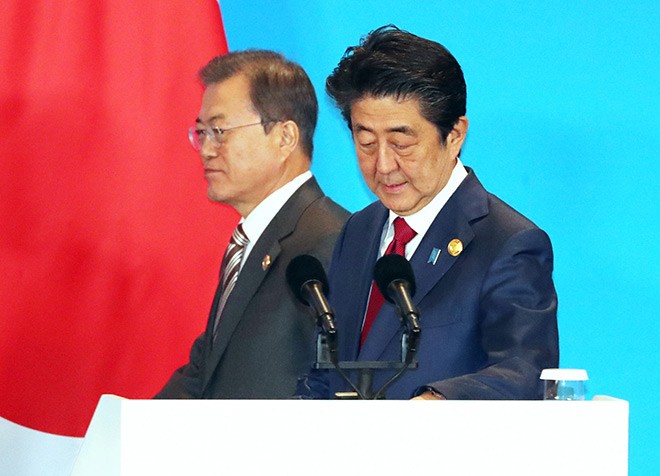 It comes as the process for the seizure and sale, ordered by a court to compensate South Koreans working for the Japanese steelmaker during World War II, moves into its next stage.

Aug. 4 marks the completion of necessary South Korean judicial procedures before the assets can be sold off for compensation payouts.

The payments were originally ordered by the South Korean Supreme Court in 2018. The court-ordered asset seizure is a separate legal matter intended to honor that decision.

Negotiations are stalled on the diplomatic front to resolve the long-standing issue.

But questions remain as to whether lower South Korean courts will be able to effectively convert the seized assets into cash to pay the plaintiffs seeking compensation.

In the cases of Nippon Steel and Mitsubishi Heavy Industries Ltd., the South Korean Supreme Court ordered 2.7 billion won (about 240 million yen, or $2.3 million) in compensation be paid out to 32 plaintiffs.

The plaintiffs had submitted a request to the Daegu District Court’s Pohang branch to seize the shares held by Nippon Steel in PNR, a joint venture set up in South Korea with South Korean steel manufacturer POSCO.

In June, the Pohang branch formally informed Nippon Steel about the decision to seize the shares. The decision came into effect on midnight Aug. 3, under a system that sets aside a certain period of time for the defendant to understand the notice.

The court branch will now issue an order to sell off the shares.

But it will first have to assess the value of the shares before they are put up for auction. That evaluation process could take several months.

But Japanese officials insist there will be problems in trying to sell the shares because the PNR stock is not listed on any stock exchange.

Foreign Minister Toshimitsu Motegi has made it clear that any attempt to cash in Nippon Steel’s assets to pay out compensation would cause a serious breach in bilateral ties.

Neither side has made efforts to avoid such a development.

A South Korean source knowledgeable about what has transpired between diplomats of the two nations said Japan refused to budge from its position.

“The Japanese government has stubbornly opposed having either it or the defendant companies pay any money on the grounds that it would violate the 1965 agreement on compensation claims,” the source said. “There was no room for negotiations so it will be difficult to avoid cashing in the shares.”

The compensation claims agreement was created as part of the process to restore diplomatic relations between Japan and South Korea.

The South Korean government had considered that Japan could implement financial sanctions as a retaliatory measure and concluded the effect of that on the South Korean economy would not be very large, the source added.

Lawyers for the plaintiffs said the court decision to cash in the assets was a legal and appropriate procedure. They said the Japanese government should not take any retaliatory measures.

A high-ranking Foreign Ministry official said there has never been an example of the assets of a foreign defendant being seized. That makes it unclear about how the actual process to cash in the assets will occur.

(This article was written by Takuya Suzuki in Seoul and Narumi Ota in Tokyo.)