This wartime pillbox was discovered hanging on a cliff in Taiki, Hokkaido. (Kengo Hiyoshi and Ryo Ikeda) 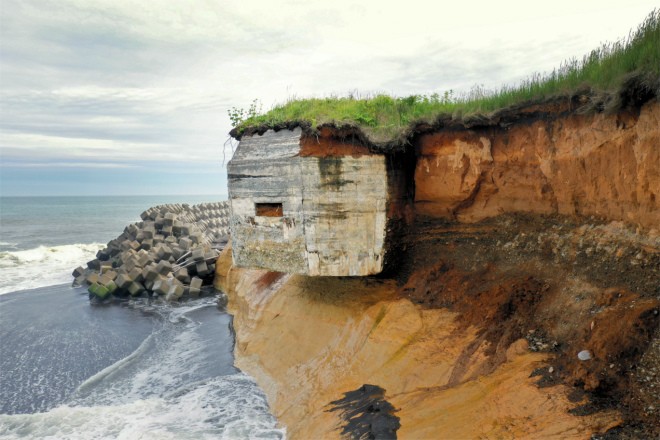 The hanging pillbox is seen jutting out of a cliff in this photo taken from a drone in Taiki, Hokkaido, on July 5. Coastal erosion has exposed what was initially an underground structure. (Kengo Hiyoshi)

The discovery of the bunker that dates back to the closing days of World War II led researchers to suspect other undiscovered structures from the conflict exist in Hokkaido.

“War remnants must be still hidden,” said Kazuhiko Onodera, who is researching Hokkaido’s pillboxes. “As there are fewer living witnesses to the wartime period, how we pass down history for posterity will emerge as a key question.”

The 62-year-old resident of Obihiro, Hokkaido, is a member of an expert panel on historical design under the Architectural Institute of Japan’s Hokkaido Branch.

“It would be no wonder if more remnants were to be discovered in the future,” said Onodera, who hopes to organize a workshop as early as this fall to look for more forgotten pillboxes.

A pillbox is a compact guard post set low into the ground, usually made of concrete and equipped with a machine gun or anti-vehicle weapons, built to defend a position of military importance. The Japanese word for a pillbox, “tochika,” is a loan word that means point or position in Russian.

A prefectural government river patrol under the Tokachi General Subprefectural Bureau’s Obihiro Department of Public Works Management discovered the concrete structure near the mouth of the Toberigawa river in Taiki in May 2017.

Officials of the town’s board of education said numerous pillboxes were constructed in Hokkaido starting in 1944 to prepare for a possible landing of U.S. military forces.

Coastal erosion over the 75 postwar years has exposed what was initially an underground structure, which now juts out of a cliff. Shaped like a trapezoid, it is estimated to measure about 5 meters wide, 4 meters tall and 6 meters deep.

A drone that approached it from the ocean side caught sight of a wooden frame that partially remains on a concrete wall and an empty, rectangular cavity of a gun port that stares at the coastline.

(This article was written by Kengo Hiyoshi and Ryo Ikeda.)