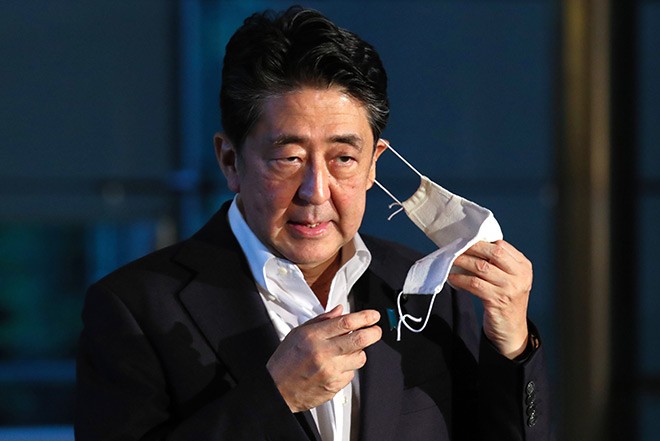 Prime Minister Shinzo Abe signaled his intention Aug. 4 to seek a “new direction” for national security policy that would allow for first-strike capability against enemy targets gearing up for missile launches against Japan.

Giving the Self-Defense Forces such power would mark a drastic course change from Japan’s long-held exclusively defensive posture. It could even alter the parameters of Japan's military alliance with the United States.

The ruling Liberal Democratic Party's Policy Research Council Board on Aug. 4 formally approved recommendations by a task force looking into alternative options now that the government has decided to abandon deployment of the land-based Aegis Ashore ballistic missile system.

Abe met with task force members who gave him the recommendations that said, "There is a need for new measures that will heighten deterrence, including possession of the capability of preventing ballistic missile launches even from within enemy territory.”

Abe then convened a meeting of the National Security Council to look into the issue.

After the meeting, Abe told reporters, “We will move ahead in setting a new direction and swiftly implement” the change.

The administration is moving to compile a new National Security Strategy by the end of the year. A major focus of future discussions will be on whether the capability to attack enemy bases will be included in that strategy.

A possible roadblock to embarking on such a policy shift could still come from junior coalition partner Komeito, which has strong pacifist leanings and would almost certainly object to taking that option.

Abe's motives for wanting to move swiftly on the issue prompted a number of explanations from those close to him.

“The prime minister has believed from the word go that Japan needs to strengthen its deterrence through an attack capability,” said one high-ranking administration official.

A senior party official speculated that Abe’s push for the new capability was an attempt to leave a “political legacy” in light of the scant progress made on three issues on which he had staked his reputation: revising the pacifist Constitution, regaining sovereignty of some or all of the Northern Territories from Russia and resolving the thorny problem of Japanese nationals abducted by North Korea.

Administration officials had encouraged LDP lawmakers to push ahead with the policy proposal because of Abe's keen interest in the topic.

Other officials speculated that Abe was simply trying to buy time and placate the United States following its decision not to pursue costly deployment of the U.S.-made Aegis Ashore system.

Under this scenario, Japan could likely delay the expected fallout from its decision to scrap the Aegis Ashore system by showing the Trump administration that it was considering possessing a new capability.

Other high-ranking government officials, noting the growing criticism being directed at the Abe administration over its response to the novel coronavirus pandemic, openly questioned whether now is the appropriate time to be even discussing the issue of possessing first-strike capability.

Faced with falling public approval ratings, the administration may not be able to push forward with the national security discussions if public support continues to falter.