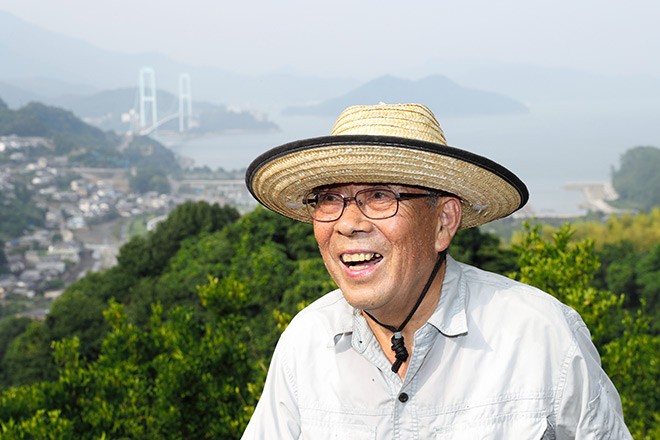 Saburo Fujii on Shimokamagarijima island stands at a spot overlooking the Akinada Ohashi bridge that connects the island with Honshu. (Koichi Ueda)

KURE, Hiroshima Prefecture--Like many others who do not live in Hiroshima city, Saburo Fujii held a silent minute of prayer while watching the annual remembrance ceremony live on TV.

Aug. 6 marks the 75th anniversary of the dropping of the atomic bomb on Hiroshima. He thought back to that day.

“Tears came to my eyes when I thought about my father and mother,” said Fujii, 80.

He now lives on Shimokamagarijima island in the Seto Inland Sea, but he was born in a central part of Hiroshima city 80 years ago.

On that fateful morning, Fujii’s father went to work at a company making letterpress. His mother carried his younger sister on her back while Fujii held hands with his brother, two years younger, while they walked to their mother’s family home. There they played, with Fuji giving his younger brother a ride on his back like a horse.

That was when he saw a flash of light and watched as the house collapsed.

The last words he heard from his mother was her screaming his name. She did not crawl out from under the collapsed house.

Fujii walked with him, barefoot, to a nearby hill.

The following day, Fujii returned to where his mother’s family home was with an aunt.

He was taken to a community center and asked if his father was among the bodies laid out on the matting. He could only say, “I don’t know.” None of the remains had faces that were still intact.

For the next three months, Fujii and his younger brother lived in a makeshift facility for orphans. In November, he was taken in by his distant relatives.

Fujii said he was well taken care of because the couple had no children of their own.

But classmates at school were not as kind. Some insulted him by saying he was adopted.

Even as a young child, he felt he could not show tears in front of the couple who were so kind in raising him.

“When I felt lonely, I covered myself with a futon and cried,” Fujii recalled. “It was all the fault of the atomic bomb.”

The father who adopted Fujii was a farmer. He taught Fujii how to grow mikan citrus fruit. When he was 24, Fujii married a woman living nearby who he knew from childhood. They had two daughters and a son.

On the few occasions he visited Hiroshima city, Fujii always felt as though his biological parents were somewhere nearby. He only stopped thinking about them after his older daughter was born.

The only true regret he has is not knowing what became of his younger brother. He was told his brother was adopted by a farming family living in Higashi-Hiroshima.

“I have no idea what happened to him,” Fujii said. “The chaos right after the war was truly miserable.”

Even though he is now an octogenarian, Fujii faithfully tends to his mikan farm every day.

“This here is my hometown,” he said. “I have a family of my own, and I want to continue working the farm until I can no longer move.”