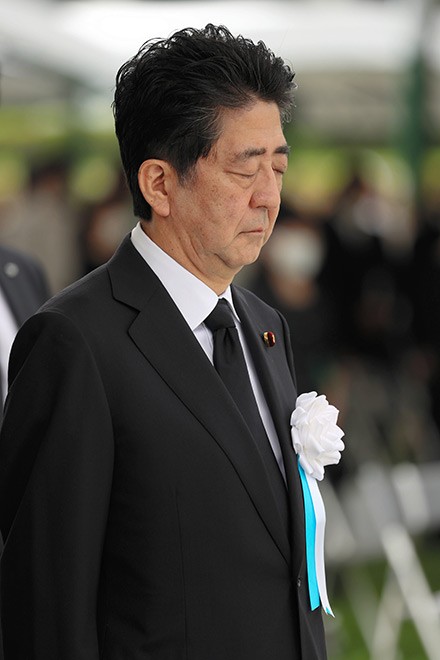 Prime Minister Shinzo Abe observes a minute of silence during a ceremony held on Aug. 6 in Hiroshima to mark the 75th anniversary of the U.S. atomic bombing of the city. (Jin Nishioka)

HIROSHIMA--Prime Minister Shinzo Abe on Aug. 6 declined to say whether the government will appeal a district court ruling that widened the scope of officially recognized survivors of the atomic bombing.

Recognition as hibakusha enables survivors to receive medical care and other government benefits.

On July 29, the Hiroshima District Court ruled in favor of all 84 plaintiffs in a case who sought recognition as hibakusha even though they lived outside the area defined by the central government as where heavy “black rain” from the atomic bomb fell.

Abe was asked about the ruling at a news conference after he attended a morning ceremony to mark the 75th anniversary of the Aug. 6, 1945, atomic bombing of Hiroshima by U.S. forces.

“In the wake of the district court ruling, discussions are being held among officials of the relevant central government ministries as well as the Hiroshima prefectural and municipal governments,” Abe said. “We will make a response based on those discussions.”

The central government has until Aug. 12 to appeal the ruling.

The local governments had urged the central government not to appeal given the advanced age of the plaintiffs.

Abe also waffled about preserving a wartime clothing factory in Hiroshima city as a relic of the bombing.

He said that the central government would decide the issue after discussions were completed within the Hiroshima prefectural government.

There are currently four structures at the former clothing factory site, with three owned by the prefectural government and the remaining building in the possession of the central government.

In December 2019, the Hiroshima prefectural government indicated it wanted to tear down two of the structures due to the danger of collapse in the event of an earthquake.

But local residents asked that they be preserved because the structures were temporarily used to care for people injured in the immediate aftermath of the atomic blast.

Kato said his ministry was prepared to cooperate with the prefectural government once it decided whether to preserve the structures.

(This article was compiled from reports by Junya Sakamoto, Takashi Narazaki and Haruna Ishikawa.)