Yet another U.S. fighter jet loses a part mid-air over Okinawa 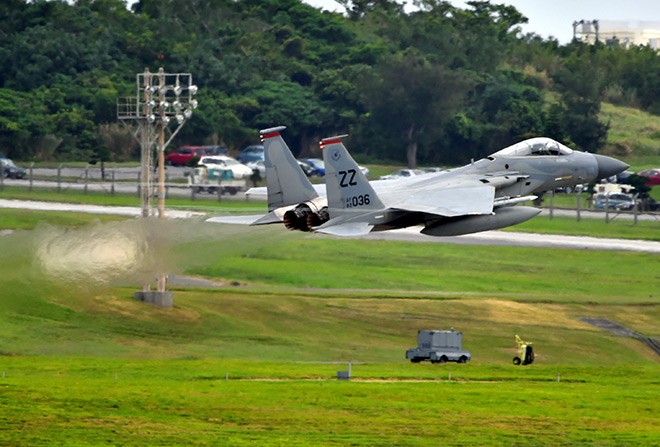 An F-15 fighter jet at the U.S. Kadena Air Base in Okinawa Prefecture in April 2017 (Asahi Shimbun file photo)

A part fell off a U.S. F-15 fighter jet while it was flying over Okinawa Prefecture on Aug. 4, according to the Okinawa Defense Bureau.

The bureau on Aug. 5 said that the U.S. Kadena Air Base, which straddles Kadena and nearby areas in the prefecture, reported the incident to the bureau in the late afternoon on Aug. 4.

The air base informed the bureau that a part measuring about 18 centimeters and weighing some 3.6 kilograms dropped off the jet at around 10:30 a.m. while it passed over the main island of Okinawa or waters off the island.

The initial Aug. 4 report of the incident did not say which air base the jet belonged to, according to the bureau, but on Aug. 5 it learned the fighter was attached to the Kadena base.

Still, it was uncertain where the part landed.

The bureau said U.S. military authorities explained that the part landed “about 96 kilometers in the east-southeast of the Kadena Air Base if it fell on the sea and along National Road No. 58 if it fell on the island.”

The bureau notified the prefectural government and municipalities that host the base of the incident after receiving the report from U.S. military authorities.

There have been numerous incidents of parts falling from U.S. military aircraft in the prefecture. In February, an FA-18 fighter jet from U.S. Marine Corps Air Station Iwakuni, Yamaguchi Prefecture, lost its cover on a fuel tank while flying over waters off the Kadena base.