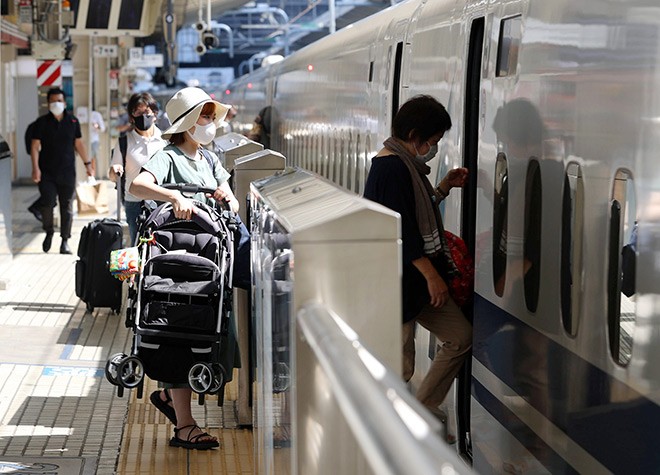 Passengers board a Shinkansen train bound for Shin-Osaka Station from Tokyo Station on Aug. 7. (Nobuo Fujiwara)

A heatstroke alert was issued for the first time for Tokyo and the two nearby prefectures of Chiba and Ibaraki on Aug. 7 as temperatures were forecast to top 33 degrees.

The alert by the Japan Meteorological Agency and Environment Ministry is intended to alert residents they face an extremely high risk of heatstroke if they venture outdoors.

Residents of the three prefectures were urged to stay home if they can and not exercise outdoors.

The alert is a new measure introduced from this month for nine prefectures in the Kanto and Koshin regions in eastern Japan. It is based on a heat indicator that gauges when temperatures hit dangerously high levels.

The indicator is calculated on the basis of temperature, humidity and amount of sunlight. The highest danger level is set when temperatures are forecast to exceed 31 degrees.

The alert is issued when temperatures exceed that danger level and are forecast to top 33 degrees.

Maximum temperatures for Aug. 7 were forecast to hit 34 degrees in Kamogawa, Chiba Prefecture, 33 degrees in Tokyo’s Nerima Ward and the Ibaraki Prefecture cities of Tsuchiura and Kashima. Many other locations were also expected to see high mercury levels of 32 degrees.