‘Ghost’ eateries conjure up tasty meals for those stuck at home 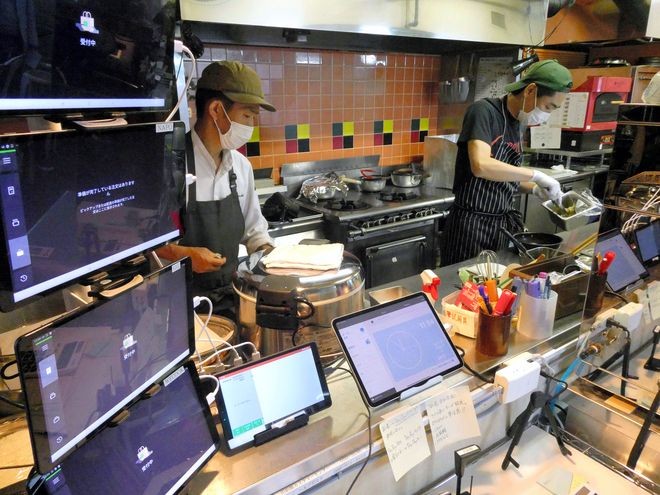 WDI Japan Inc. uses a kitchen intended for product development to cook meals for its multiple delivery services, and orders come in through many tablet devices. (Yoshikatsu Nakajima)

A "ghost restaurant" exists within a three-story building in a corner of the residential area of the Nishi-Azabu district in Tokyo.

But there's reason for hungry customers to feel scared.

Instead, Ghost Restaurant Kenkyujo is so named because it can only be contacted through the internet, has no dining room and the dishes are delivered to customers through third-party agents.

Inside a kitchen covering a 40-square-meter area on the building’s first floor, the eatery complex with no signboards cooks for nine online food delivery services, including the Tokyo Mabo Chinese restaurant and the Yim Yim “tom yam kung” shop.

Three or so staff members make meals there for orders taken on nine tablet computers for each food service through the Uber Eats delivery agency and by other means.

The operator of the seat-less establishment was established in January last year. Delivery-based services were well known in the United States and China as “cloud kitchens,” but there were few in Japan at the time.

The Nishi-Azabu store grew so quickly that its monthly sales have increased to 5 million yen ($47,350) in a year.

Order numbers rose from April after consumers started refraining from eating out under a state of emergency declaration amid the novel coronavirus outbreak. Currently, 100 to 150 dishes are delivered a day, according to its representatives.

This type of business does not require waiters and other personnel costs unlike ordinary restaurants. As ghost eateries do not need to be opened in popular areas, they can easily be started more inexpensively anywhere.

Yuki Yoshimi, president of Ghost Restaurant Kenkyujo, said when facing a lack of business, they can promptly be shut down to begin new ones.

“An advantage is the faster scrap-and-build cycle,” said Yoshimi. “By repeating the cycle, the most wanted services can be offered for certain regions.”

Ghost Restaurant Kenkyujo has received an increasing number of inquiries about franchising, so it is looking to open its second shop in Osaka Prefecture as the first step toward opening 30 to 40 kitchens within three years if everything proceeds smoothly.

Major restaurant chains are following suit since their outlets were forced to suspend operations under a state of emergency.

The meals are created at kitchens in Tokyo and Osaka Prefecture that are usually used for product development.

“The ghost restaurants represent our endeavor to nurture a new business model,” said Norio Fukuda, a director of WDI Japan. “We will open more of them in residential areas in suburban zones where the required facilities can be rented at a lower cost.”

Some ghost restaurants do not have even their own kitchens because they use equipment of other operators when not in use.

The method offers advantages both for those who do not have kitchens but want to open eateries as well as restaurant owners who hope to secure a new revenue source by renting out their facilities.

With the trend in mind, Yoshinoya Holdings Co., a “gyudon” beef bowl restaurant chain, began a new business to link individuals with eatery owners. It opened a matchmaking website in 2018 with full-fledged operations starting in March this year.

By the end of June, 400 restaurant operators managing mainly bars and “izakaya” Japanese-style pubs not only in Tokyo but also Osaka, Aichi and Fukuoka prefectures have registered on the site to lease out their kitchens, allowing 150 individuals to open their shops.

Kosuke Tsukamoto, 32, who runs 20 takeout and delivery stores offering “ultimate meals” using broccoli and chicken breasts, started his career in the food industry via the site.

Tsukamoto, a former engineer of an information technology service provider, had never worked on a restaurant staff and did not have sufficient funds. He thus hesitated to start on a new career path, but the turning point came when he learned of the Web page.

He opened his first shop within a bar kitchen in Tokyo’s Shibuya Ward in August 2019. The opening costs totaled 500,000 yen and the monthly rent was about 130,000 yen. The second outlet was started three months later in the capital’s Roppongi district.

More stores have also been introduced in Osaka, Nagoya and elsewhere across the nation under franchise agreements.

“I could not take out huge loans to start my business, taking into account the risks associated with doing that,” Tsukamoto said.

Jun Takeshige, a senior official at Yoshinoya Holdings, explained the merits of the company’s matchmaking service.

“Restaurants are often forced to close their businesses before winning over fans,” said Takeshige. “The bankruptcy risk will lower if opening ones’ own shops after garnering fans through kitchen-rented operations.”

There are, however, challenges to be overcome.

Ghost restaurants use delivery agents but their commissions are expensive. Uber Eats, for example, is said to cost 30 to 40 percent of sales for delivery fees.

In addition, bad weather and other elements result in a surge in the number of orders, and it is sometimes difficult to deal with delivering such a high volume of meals under such circumstances.

Now that many restaurant operators are bolstering efforts to sell takeout and delivery products, the competition is expected to further heat up.

Munenori Hotta, an associate professor of food service industry studies at Miyagi University, noted difficulties that ghost eateries may face in the future.

“It is natural for operators of struggling outlets to aggressively enter the ready-made meal market (for takeout and delivery services), and many of them might start mobile catering services as well,” he said. “It will become increasingly difficult to stand out from others in the business.”

(This article was written by Takumi Wakai and Yoshikatsu Nakajima.)