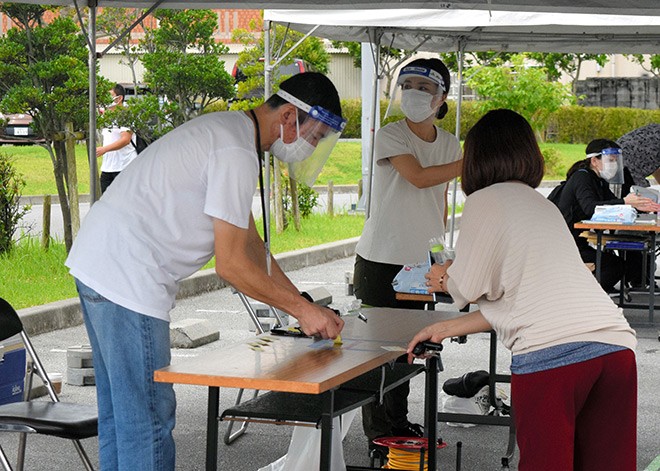 Novel coronavirus infections are spreading at around the same pace seen in March and April in some regions, creating an “alarming” situation that requires urgent measures, an advisory panel of experts said Aug. 6.

During a meeting that day, the health ministry’s panel on COVID-19 measures warned that public health centers and medical institutions are already having difficulties in dealing with the rising number of cases, and health care systems in some parts of the country could be overwhelmed.

At a news conference after the meeting, Takaji Wakita, who chairs the panel, named Tokyo, Osaka and Fukuoka prefectures as areas where cases are surging.

“We are seeing an extremely rapid spread of infections, particularly in Okinawa Prefecture,” added Wakita, who is head of the National Institute of Infectious Diseases.

Health ministry statistics show that 7.33 new cases per 100,000 people were confirmed over the week through Aug. 5. That is 1.5 times higher than the figure for the previous week.

The ratio of cases whose infection routes were untraceable was 52 percent over the week until July 31, almost the same as the previous week.

The rate of positive test results has increased for seven consecutive weeks and reached 6.7 percent in the most recent week. That indicates that testing has not kept up with the pace of new infections.

The panel also discussed how to ensure that patients with mild or no symptoms who are less likely to become seriously ill can properly recuperate at their homes.

The health ministry currently is asking such patients to rest at accommodations, in principle. However, with the continued increase in cases, some municipalities are unable to secure enough facilities, such as hotels, to accommodate such patients.

The rise in cases has also put a heavier burden on public health centers.

The panel aims to provide more options where patients can recuperate, including their homes, by setting clearer requirements for those who can rest at their homes.

The ministry said it will consider issuing a notice to prefectural governments when the requirements are set.

The Japanese Association of Public Health Center Directors listed its own recommendations in a written opinion submitted to the panel’s meeting.

The association said patients who can rest at their homes should be limited to those who live alone as well as people who can prepare a separate sleeping space, bathroom and toilet to self-isolate from other family members who must be nonsmokers.

(This article was written by Akiyoshi Abe and Naoyuki Himeno.)