‘Anywhere Door’ on Nagoya campus is portal to imagination 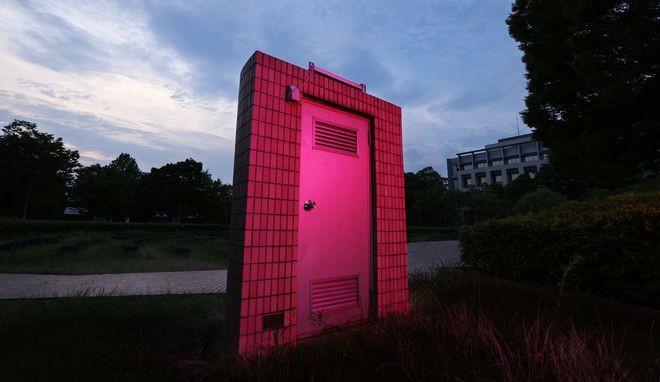 Standing on the campus of Nagoya University in Nagoya's Chikusa Ward, the structure is illuminated with a pink light to make it look closer to the Anywhere Door from "Doraemon." But it turns out to look far different from the one in the animated series. (Jun Ueda)

NAGOYA--A door that stands alone on the Nagoya University looks nothing out of the ordinary.

But the aluminum-frame door, covered with brick-colored tiles, is something of a mystery.

Seen from behind, it has almost no depth, making it look like the "Dokodemo Door" (Anywhere Door) from the popular "Doraemon" manga series.

The Anywhere Door is a teleportation portal that leads to any location the user wishes to visit. It is one of the signature items of Doraemon, a robotic cat from the future, who has a special pocket from which he produces secret gadgets.

Does it mean Nagoya University's research-and-development efforts have put the fictional gadget into practical use?

The door in question stands in the middle of the Green Belt zone in the university's Higashiyama Campus in the city's Chikusa Ward. Running to the west from Toyota Auditorium, the area serves as the main street for the school.

So, where does it lead to?

When Takashi Fujimaru, assistant chief of the university's Facilities Control Department, opened the door, it revealed a distribution board lined with switches and meters. It turned out to be a facility that protects power supply equipment used for the outdoor stage on the campus grounds, supplying power to festivals and other events, Fujimaru said.

The door is situated on the backside of the outdoor stage, keeping it out of sight from the stage.

It is a common sight to find box-shaped distribution boards placed under traffic lights and elsewhere across town. But university officials chose a design that would blend in with the surrounding buildings out of consideration for the campus landscape.

Although the installed door is a ready-made product, Fujimaru thinks there is a reason behind it.

"I assume that while the landscape is taken into consideration, it is intended to reduce costs for the out-of-sight section," he added.