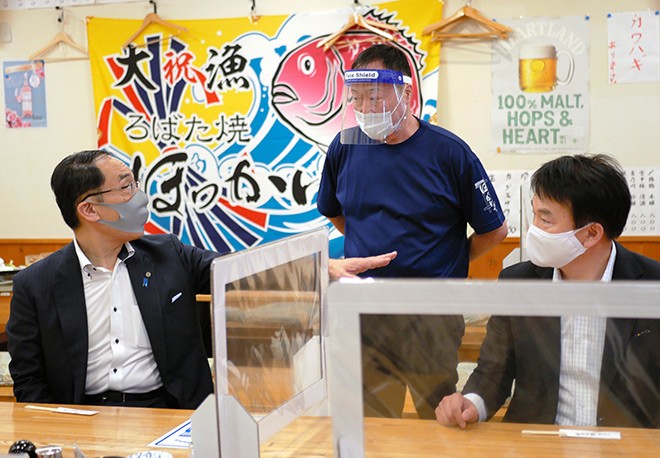 New daily highs for COVID-19 cases were reported in Saitama, Kanagawa and Yamaguchi prefectures on Aug. 8, as the nationwide total hit 1,570, the fifth consecutive day the count has topped 1,000.

There was one death reported from the new coronavirus on Aug. 8, a man in his 60s in Fukuoka Prefecture.

The total of hospitalized patients on Aug. 8 in the capital hit 1,509, the highest since the middle of May, when metropolitan officials began collecting such data.

Okinawa Prefecture counted 84 cases on Aug. 8, raising the overall total to 973 in the prefecture.

Okinawa is experiencing the most widespread outbreak per 100,000 people in the nation.

The prefectural government logged 33.56 new patients per 100,000 people over a week through Aug. 7, the eighth straight day of registering the highest such number in the country.

In Okinawa, the hospital bed occupancy rate for COVID-19 patients dropped to 118.9 percent on Aug. 8 from 147.3 percent on Aug. 7 as prefectural officials asked patients with no or light symptoms to recuperate at home.

The Okinawa Medical Association, a group of doctors in the prefecture, announced on Aug. 8 that 86 of about 2,000 people working at restaurants and other venues in the Matsuyama entertainment district in Naha tested positive for the coronavirus.

The tests were conducted from Aug. 1-2. Ten of the 86 patients were already counted in the prefectural government’s tally released to the public.

The positivity rate was 4.1 percent. Of the newly confirmed patients, 40 percent had no symptoms, according to the association. None of the new patients was in a serious condition.

On Aug. 8, the Okinawa prefectural government reported seven new cases at U.S. bases in the prefecture, including six at the Marine Corps’ Camp Courtney in Uruma.

The overall total of cases among the U.S. military in Okinawa Prefecture stands at 306, prefectural officials said, citing reports they have received from U.S. military authorities.