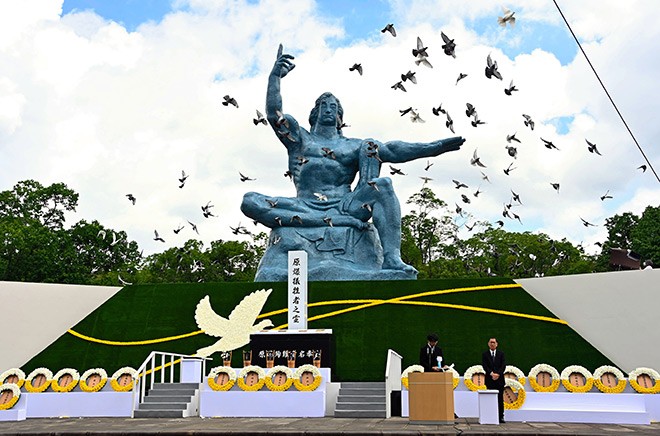 Doves take off from Nagasaki Peace Park on Aug. 9., where the ceremony to memorialize victims of the atomic bombing was held near the Peace Statue. (Pool)

NAGASAKI--As Nagasaki solemnly marked the 75th anniversary of the atomic bombing, the mayor here on Aug. 9 pressed Japan to sign and ratify a United Nations treaty to ban nuclear weapons.

However, Prime Minister Shinzo Abe failed to mention the Treaty on the Prohibition of Nuclear Weapons in his address that followed.

In his opening Nagasaki Peace Declaration remarks, Mayor Tomihisa Taue called for the government to sign the treaty and see through its ratification “at the earliest possible date.”

“If, as with the novel coronavirus which we did not fear until it began spreading among our immediate surroundings, humanity will not become aware of the threat of nuclear weapons until they are used again, and we will find ourselves in an irrevocable predicament,” Taue said.

But Abe did not refer to the treaty when he delivered his address at the ceremony, which was also the case when he was present at the commemorative event in Hiroshima three days ago.

Abe said Japan will adhere to its three anti-nuclear principles against producing, possessing and allowing the entry of nuclear weapons into Japanese territory while working as a bridge between countries taking differing positions on nuclear weapons.

He also said Japan will push to promote dialogue between those countries.

Shigemi Fukahori, 89, one of the dwindling number of survivors of the nuclear blast, gave the Pledge for Peace.

He worked at Mitsubishi Heavy Industries Ltd.’s Nagasaki Shipyard when the plutonium bomb detonated. Four members of his family were killed in the atomic bombing of the city, which occurred at 11:02 a.m. on Aug. 9, 1945.

Fukahori, a Catholic, presented a wreath when Pope Francis visited Ground Zero in Nagasaki in November.

In the Pledge for Peace, Fukahori said, “I will continue to champion my conviction that Nagasaki should be the world’s last atomic bombing site, inspired by the papal call for the abolition of nuclear weapons.”