VOX POPULI: If an atomic bomb had not been dropped on city of Nagasaki 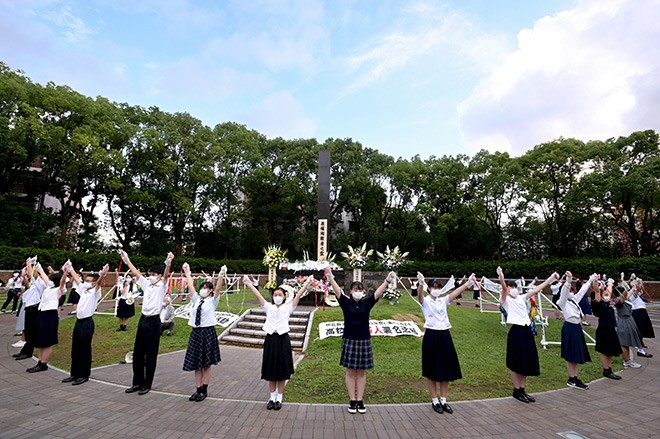 High school students form a human chain around the Hypocenter Cenotaph in Nagasaki on Aug. 9. They wore gloves and held tapes, instead of hands, to prevent the spread of the novel coronavirus. (The Asahi Shimbun)

A day after the atomic bombing of Hiroshima on Aug. 6, 1945, U.S. military officers in Guam said Tokyo should be the next target, not a small local city.

But Washington struck down the proposal, and the second atomic bomb was dropped on Nagasaki three days later.

Yozo Kudo, 70, a former professor at the National Institute of Technology’s Tokuyama College, and others studied declassified U.S. documents to follow how the U.S. government chose targets for its attacks.

As of April 1945, as many as 17 cities were considered, including Tokyo, Yokohama, Kyoto, Osaka and Shimonoseki.

“The U.S. military wanted cities that would better demonstrate the destructive force of an atomic bomb,” Kudo says. “An order had been issued not to drop conventional bombs to keep candidate cities intact.”

Tokyo and Osaka were removed from the list because they were damaged by massive air raids, and Kyoto was excluded due to its historical value.

Niigata was long in the running as a favorite candidate. But the city was not selected because it was far from U.S. bases and its urban areas stretched out along a river.

On Aug. 9, 1945, a U.S. bomber flew toward Kokura, a city in Kyushu, which had met all conditions for the target. But unexpectedly poor visibility forced the aircraft to turn to Nagasaki, another city in Japan’s southern main island.

The declassified U.S. documents show Nagasaki was added to the target list on July 24, less than a month before the end of World War II.

The process leading to the atomic bombing of Nagasaki makes me feel a profound sense of powerlessness.

I cannot but help wonder whether it was necessary to deploy such an inhumane new weapon when the outcome of the war was already obvious.

I imagine the agony experienced by Nagasaki, which was almost arbitrarily chosen as the target after so many twists of fate.

Aug. 9 offers a chance to take the horror of war into our hearts while mourning the loss of tens of thousands of precious lives in an instant.