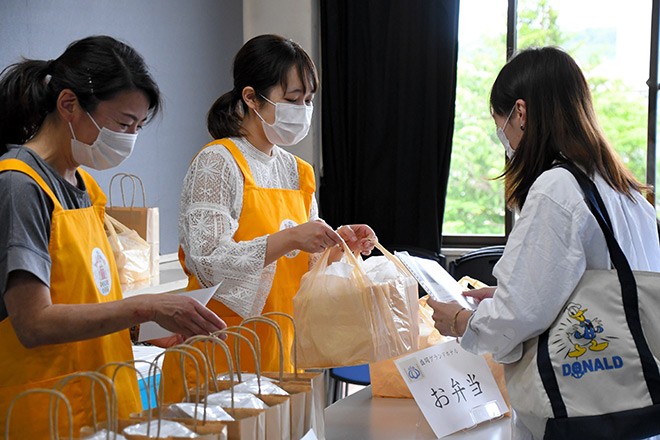 Members of a support group, which cannot open a children’s cafeteria due to the novel coronavirus pandemic, hand out free food to single-parent families in Morioka in June. (Asahi Shimbun file photo)

Approximately one in seven, or 13.5 percent, of all children in Japan are living in a state of poverty, according to the Comprehensive Survey of Living Conditions released last month by the welfare ministry.

In particular, the high poverty rate among fatherless households is a longstanding problem.

In fact, the survey was conducted back in 2018. The novel coronavirus crisis could be taking a further toll on children facing such difficulties.

There is an urgent need to conduct fact-finding studies on the matter and expand assistance measures.

The poverty rate represents the percentage of children under 18 living in households with less than half the median income. The latest figure is slightly down from 13.9 percent in the previous survey of 2015.

Still, Japan ranks the third worst among the Group of Seven countries after the United States and Italy.

Nearly 90 percent of all mothers in Japan’s fatherless households are working. Despite that, their mean income was only 2.31 million yen ($21,800) in the 2018 survey, roughly one-third the average of all households with children.

That is because there is wage disparity between men and women and because many mothers in fatherless households are working without regular contracts.

In June this year, the nonprofit Single Mothers Forum took a survey of single-parent families, to which the group was delivering food products. More than 70 percent of the respondents said their incomes had dropped.

Some respondents said they were eating fewer times or consuming lesser amounts of food to cut down on living expenses.

The government has said it is providing a minimum of 50,000 yen to single-parent households receiving child-rearing allowances and an additional 50,000 yen in the event of a drop in income. There is, however, a deep-rooted opinion saying that is not enough.

The COVID-19 crisis is expected to have protracted consequences. The government should obtain an accurate grasp of the reality and study what needs to be done.

Furthermore, nonprofit organizations working to address child poverty are facing difficulties of their own. They include operators of “children’s cafeterias,” which provide cheap meals to young ones from cash-strapped families, and providers of learning assistance to children in a similar situation.

It has become more difficult for those groups to collect donations from businesses and other supporters of their activities. They are also being obliged to limit their activities to avoid the risk of coronavirus infections.

The government should turn its attention to that reality and provide support to affected organizations.

The administration of Prime Minister Shinzo Abe has stated the goal of expanding assistance to households raising children. It has taken steps in that direction, such as reducing the burden of school and university tuition fees and applying the tax exemption system for widows to households with an unmarried single parent.

A law that requires prefectural governments to make the best efforts to develop plans for fighting child poverty was amended last year to place municipal governments under the same obligation.

The central government’s “guidelines on measures against child poverty” was reviewed last November, so more fine-tuned indicators are available for checking up on the state of poverty and the progress of policies.

The outcome of all those efforts will only become evident in the years to come.

Experts have long said that Japan’s assistance measures are not enough in the field of child poverty. The country’s policy measures should be made more effective by drawing on reality and progress checks.

We should support children’s growth and education as an entire society. We cannot afford to delay making investments for that purpose.