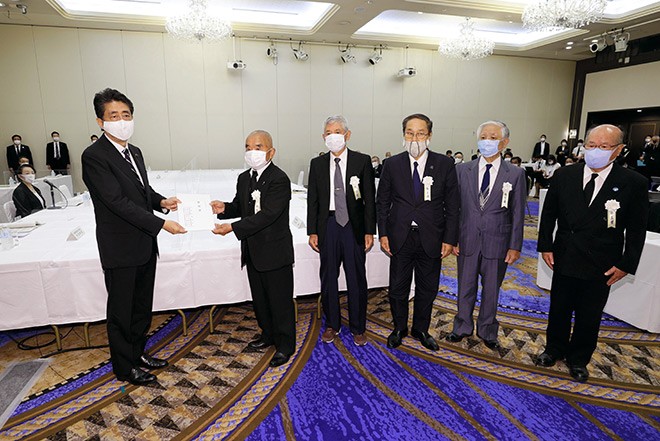 Representatives of five groups of hibakusha met with Abe after he arrived from Tokyo to attend the annual ceremony to commemorate victims of the bombing.

In his address during the ceremony, the prime minister said his government will “give consideration to hibakusha’s feelings.”

But he did not visit the Nagasaki Atomic Bomb Museum, which the representatives had requested he do when they met with him last year.

Abe also made no mention during his speech of calls by hibakusha for the government to sign and ratify the Treaty on the Prohibition of Nuclear Weapons.

“If the government says it will be considerate of hibakusha’s feelings, the prime minister should grant our request,” said Shigemitsu Tanaka, 79, head of the Nagasaki Atomic Bomb Survivors Council, one of the five groups, after this year’s meeting with the prime minister. “He should ponder his reason for traveling all the way to Nagasaki.”

After the ceremony, the representatives handed a written request when they met with Abe and other government officials.

The government side reiterated its longtime position that Japan will continue to work to bridge differing stances taken by countries on the abolition of nuclear weapons and lead efforts to promote international debate on the issue.

Koichi Kawano, 80, chairman of the A-Bomb Survivors Liaison Council of the Nagasaki Prefecture Peace Movement Center, said he was disappointed by the lack of substance in the prime minister’s speech.

“The government vows to work as a ‘bridge,’ but I am wondering what it has been actually doing while being complacent about remaining under the U.S. nuclear umbrella,” he said.

Hibakusha were also dismayed by the almost identical speech delivered by Abe at the commemorative event held in Hiroshima three days earlier.

“We might have felt a serious note if his speeches had contained references to respective details unique to Hiroshima and Nagasaki, but there were none,” said Masao Tomonaga, chief of the Nagasaki-ken Hibakusha Techo Tomo-no-Kai (association of people with the official designation as hibakusha).