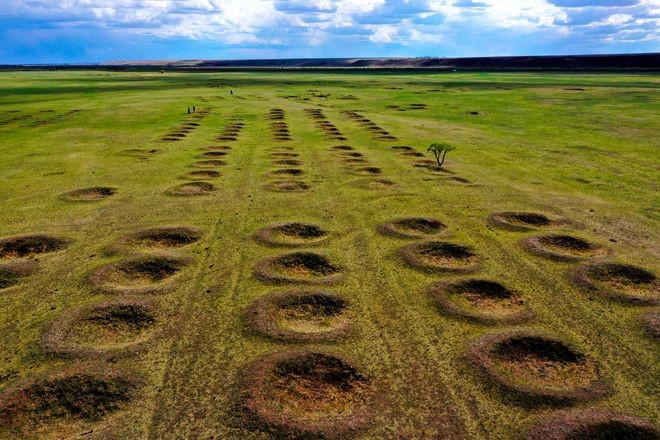 A photo taken using a drone in eastern Mongolia shows remains of circular bunkers, each about 10 meters in diameter, that were used by the Red Army to store supplies during the Nomonhan Incident in 1939. (Provided by Hisaya Okazaki)

A string of pits covers the plain about 1,200 kilometers east of the Mongolian capital of Ulan Bator.

Getting to the area involved a three-day drive over bad roads.

It was only possible to understand the significance of this location through a bird’s-eye of the pockmarked land.

A military encounter, triggered by allegations of territorial intrusion, occurred here in 1939 and came to be known as the Nomonhan Incident after the name of the site.

The site that spread out before us was what remains of the battlefield.

A combination of the Japanese and former Manchurian armies fought against the enemy made up of the former Soviet Union and Mongolia.

What appeared to be pits found around the plain were circular bunkers, each about 10 meters in diameter, that were used by the Red Army to store supplies. About 200 of these pits were arranged like a chessboard.

Because the area is now close to the border with China, aircraft are prohibited from flying over it. The unusual nature of the site was only learned through photographs taken using a drone by a study group in May 2019 that a reporter from The Asahi Shimbun accompanied.

A total of about 1,430 circular bunkers, including the 200 or so laid out like a chessboard, were confirmed through visual images taken by a geodetic satellite of an area about seven kilometers in a north-south direction along the Khalkhin Gol river that lies just to the west of the site.

Many of the pits were dug on the side of slopes that kept them hidden from the Imperial Japanese Army that was situated to the east.

Along the southern side of the line of bunkers were groups of four or five slightly larger bunkers that looked like wolf footprints.

Hisaya Okazaki, who headed a local study group that has been examining wartime relics in the area since 2009 through cooperation with Mongolian authorities, believes the Soviet army used the larger pits to install heavy artillery.

Because of the many years Okazaki, 57, has spent researching the area, greater freedom has been granted to him to study and photograph the site.

Such activities would normally be severely restricted because of its proximity to the national border.

At one spot several dozens of meters away lay a helmet used by a Soviet army soldier, known as the M-36. What appeared to be a bullet hole was found on one side. The rust and deterioration of the helmet spoke of the eight decades that have passed since the battle.

In August 1939, the Japanese side was obliterated by a Soviet army that had an overwhelming advantage in terms of equipment and supplies. A total of 16,000 soldiers on both sides perished.

In recent years, some historians have begun describing the battle fought at Nomonhan as the true “starting point” of World War II.