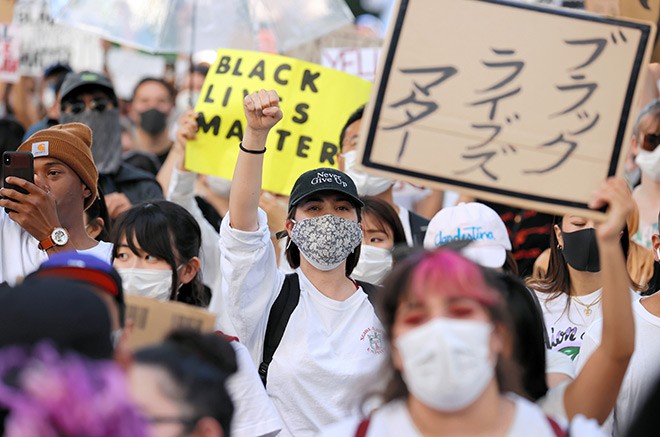 Protesters march through the streets of Osaka city to speak out against racial discrimination toward black people on June 7. (Jin Nishioka)

The Black Lives Matter (BLM) civil protest movement continues to rage in the United States. Why is the anger not abating at all?

I would have loved to pose this question in person to U.S. author Toni Morrison, who died on Aug. 5 last year at age 88.

"Were she still alive, she undoubtedly would have thrown her unequivocal support behind the BLM movement and galvanized everyone," said Konomi Ara, 74, a professor emerita of American literature at the Tokyo University of Foreign Studies.

Ara's published works include a Japanese translation of a lecture given by Morrison, with whom she was personally acquainted.

"But Morrison would have supported the cause only through her writing," Ara noted. "She was not the type to get on her soapbox and deliver a speech to street demonstrators."

In 1993, Morrison became the first Black woman to win the Nobel Prize in Literature for depicting the gut-wrenching plight of Blacks whose ancestors were brought to the United States and sold as slaves.

Her iconic "Beloved" trilogy, for instance, delves into the anguish of a Black woman who kills her newborn daughter to ensure she will not suffer a terrible fate at the hands of whites.

The current surge of the BLM movement began in late May when a white police officer pressed his knee to George Floyd's neck and choked him to death.

President Donald Trump's racist rants and hard-line policies are adding fuel to popular outrage, but that alone cannot be considered the reason for the prolonged protests.

"American society could never function without the labor and forbearance of Blacks, and yet America's white elites have always treated them as if they didn't exist," noted Ara. "And now, that contradiction can no longer be contained."

I am made acutely aware that the BLM movement is not only about denouncing police brutality, but also about condemning systemic racism itself that still remains in society.

With every page of Morrison's novels I turn, I feel her lifelong message to non-Blacks, which would go something like this: "What you are witnessing is our legitimate objection to the inhumane treatment we Blacks have received since the time of our great-grandparents."