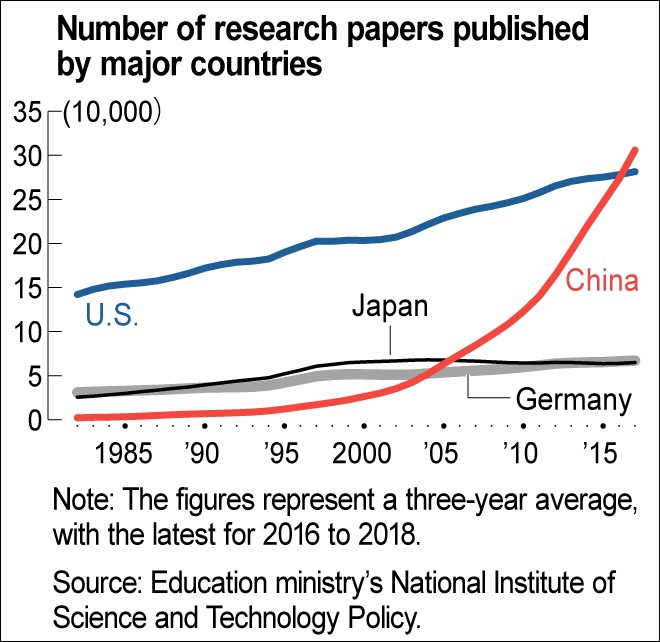 China has overtaken the United States for the first time as the world’s leader in the publication of research papers in the natural sciences, according to a study by a Japanese education ministry institute.

The findings by the National Institute of Science and Technology Policy (NISTEP) also show the pace of spending on research and development by China is approaching that of the United States.

The number of natural science research papers published in scientific journals is seen as a barometer for gauging a country’s research and development abilities. The findings were released on Aug. 7.

The institute's study looked at papers in the natural sciences published across 10,000 or so scientific journals between 2016 and 2018, including the prestigious British journal Nature.

According to the study, the yearly average of research papers published across those journals reached about 1.54 million for the three-year period.

Germany ranked third at 4.4 percent, followed by Japan at 4.2 percent.

China was particularly strong in the areas of material science, chemistry and engineering, representing around 30 percent of the papers published.

China’s ascent to the world’s top position in the publication of research papers marks the first time since the NISTEP began analyzing the trend in 1981.

Against the backdrop of China’s meteoric rise is massive cash injection by the country into research and development projects, as well as an expansion of programs allowing large numbers of students to study abroad.

Chinese universities’ spending on research increased 10 times from eight years ago, while spending by Japan, the United States and countries in Europe only rose from one to 1.8 times over the same period.

In addition, about 320,000 Chinese nationals are studying in the United States, more than in any other country, allowing them to learn on the front lines of their natural science disciplines and publish their research.

China is also closing the gap in the measure of quality research. In the category of highly cited papers, China’s share was 22.0 percent, the second only to the United States, whose share was 24.7 percent.

“China will likely outstrip the United States in two to three years” in this category, said an NISTEP official.

Japan’s downward trend in terms of the number of highly cited papers continues.

In the latest findings, Japan ranked ninth, or 2.5 percent, down from a decade ago when it held fifth place at 4.5 percent.