Abe gets pasting for similar speeches during A-bomb events 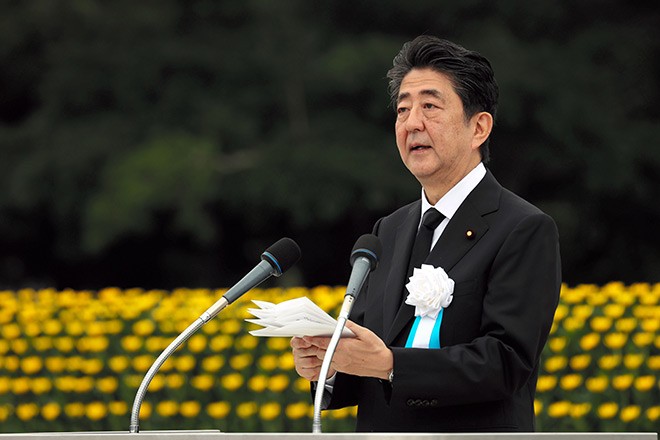 Prime Minister Shinzo Abe came in for sharp criticism for delivering two strikingly similar speeches during annual memorial ceremonies on Aug. 6 and 9 to mark the atomic bombings of Hiroshima and Nagasaki.

Asked about the resemblance in content, Chief Cabinet Secretary Yoshihide Suga told a news conference Aug. 11 that such a situation was “unavoidable.”

Groups of hibakusha atomic bomb survivors expressed utter disappointment at the prime minister's performance on the 75th anniversary of the two events at the end of World War II that claimed hundreds of thousands of lives.

Abe also got a pasting online for essentially copying and pasting one speech onto another.

Both speeches started with, “Today, at the opening of the Hiroshima (Nagasaki) Peace Memorial Ceremony on the 75th anniversary of the atomic bombing ... .”

The structure and number of paragraphs were the same in both speeches. Only the location and ceremony names were changed.

Of the 11 paragraphs in each speech, 10 paragraphs were practically identical except for the occasional different turn of phrase.

Each speech contained 1,140 or so characters, which were identical in 90 percent of both versions, excluding the location and ceremony names.

Even concluding paragraphs were precisely the same, except for the location names.

Suga at the news conference trotted out the well-worn theme that Abe’s speeches “expressed his sincere condolences to the souls of atomic bomb victims and Japan’s position as the only country to have experienced the nuclear weapons.”

Abe in the past has come under fire for delivering speeches at both ceremonies similar to ones in the previous year.