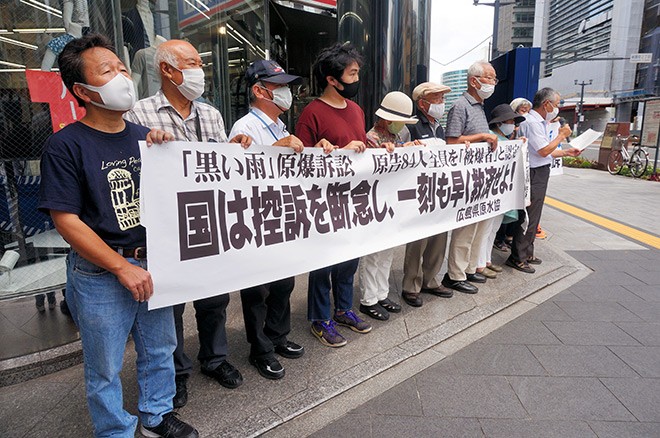 Supporters of plaintiffs seeking health care benefits as hibakusha hoist a banner calling on the central government not to appeal a lower court decision in Hiroshima on Aug. 11. (Sonoko Miyazaki)

The state is appealing a lower court ruling that would extend health care benefits to 84 plaintiffs who lived outside of a government-designated zone where radioactive “black rain” fell after the 1945 atomic bombing of Hiroshima.

The central government, along with the Hiroshima prefectural and city governments, filed an appeal on Aug. 12., nearly a week after the 75th anniversary of the atomic bombing of Hiroshima and two weeks after the ruling.

Although local authorities were initially reluctant to appeal the Hiroshima District Court decision, they agreed to challenge it because the central government, pushing for an appeal, promised to review whether the zone’s boundary was appropriate.

The prefectural and municipal governments are entrusted by the central government to screen applicants for access to such relief measures available to hibakusha atomic bomb survivors.

Those governments were named as defendants in the group suit. The central government is taking part in the legal proceedings because the court dispute concerned its relief policy.

Prime Minister Shinzo Abe said the same day the central government will challenge the lower court ruling, as it was not consistent with the top court’s decision on similar cases.

In the ruling on July 29, the district court recognized the plaintiffs, who lived outside of the area the government classified as where the toxic rain fell, as hibakusha and eligible for state health care and other aid.

In a 1945 study by local meteorologists, the radioactive rain fell in the area, measuring 15 kilometers east to west and 29 km north to south, located to the northwest of ground zero.

The central government determined in 1976 that only people who were in the zone where heavy rain fell are entitled to free health checkups, free medical treatment if they develop a disease linked to exposure to the atomic bombing, and other aid available to hibakusha.

The heavy rain zone was limited to 11 km in width and 19 km in length.

But an investigation by prefectural and municipal authorities found that the black rain zone could have been more expansive than the one defined by the central government.

The district court ruling recognized that survivors who lived beyond the heavy rain area were also eligible to health care assistance as hibakusha.

On Aug. 12, health minister Katsunobu Kato criticized the district court decision, saying it is not based on sufficient scientific evidence.

But he said the central government will open a review for a possible extension of the zone by conducting a study with the use of the latest technology, in response to a request from local authorities.

However, he was not clear on when the deadline would be for the review.

Kato indicated that the results of the review could also affect survivors of the atomic bombing of Nagasaki, which occurred three days after Hiroshima's.