Lisa’s In and Around Tokyo: Ginza Sony Park--Iconic street corner gets a new look for now 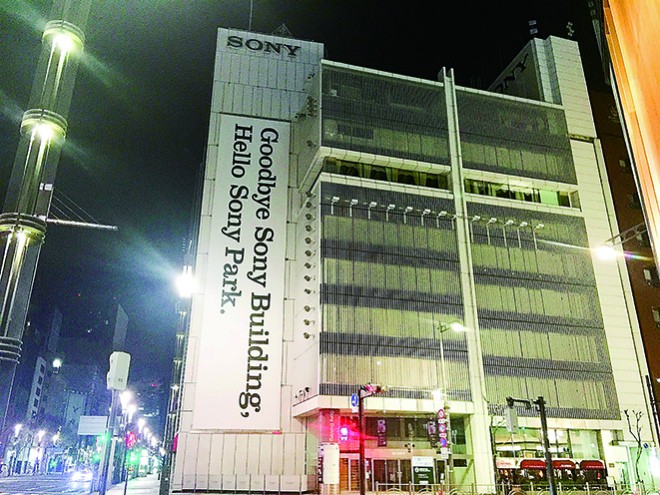 The former Sony Building has been renovated into a multistory attraction with one-of-a-kind stores. The construction of a new Sony Building is scheduled to be completed in 2022. (Photo by Lisa Vogt)

Now you see it, and now you don’t. On one corner of Sukiyabashi intersection is Tokyu Plaza Ginza with its facade that resembles “Edo kiriko” cut glass.

It seems like only yesterday that corner was home to the Ginza Toshiba Building, with a bookstore on the first floor.

On another corner is a police box with its brick-like walls and a conical-shaped roof located in front of Nishi-Ginza Chance Center, Tokyo’s “luckiest” lottery tickets shop.

Behind it is Yurakucho Mullion, a retail complex with movie theaters and a famous musical clock. In my time, Mullion was unique because entering the building from the intersection, on the left side, was Hankyu, and on the right side was Seibu Department Store. And on the corner is Fujiya Confectionery of Peko-chan fame.

Despite Fujiya occupying only a tiny area on the first floor, the neon atop the building gives the impression that the whole wavy-mirrored building belongs to Fujiya (as it once did).

There’s one more corner. What’s there? The Sony Building, of course! Well, at present, it’s just a public space with exotic-looking greenery dotting the premises and not much of anything else. It’s called Ginza Sony Park, and if things go as scheduled, a new Sony Building will be erected later this year and completed in 2022.

Sony is one of Japan’s truly “private” brands that is ultra-successful. A friend who works for Sony once remarked, “If Sony were to disappear completely, it would be missed, but life would go on. It’s different from a 'zaibatsu' type of company because they are connected with the infrastructure and security of the nation.”

I hadn’t thought of Japanese companies in such a light before, and he had a point.

Sony has had its share of ups and downs. There were periods in which it seemed to rule the world, yet in recent times, it’s lost its luster.

During the Edo Period (1603-1867), there really was a teahouse and bridge in the Sukiyabashi area. In the Showa Era (1926-1989), the moat was covered, and the location went on to become a famous intersection in Tokyo. On each of the four corners, an iconic structure sprang up.

Decades from now, people will look at the new Sony Building and talk about how things used to be when the old Sony Building was here. I hope Sony wows us with its new structure and that it becomes a catalyst for a new and bright phase in Sukiyabashi and for the iconic Japanese brand. Here today, gone tomorrow, and here once more.

This article by Lisa Vogt, a Washington-born and Tokyo-based photographer, originally appeared in the June 21 issue of Asahi Weekly. It is part of the series "Lisa’s In and Around Tokyo," which depicts the capital and its surroundings through the perspective of the author, a professor at Meiji University.