100 citizens rally in Tokyo to show support for Agnes Chow 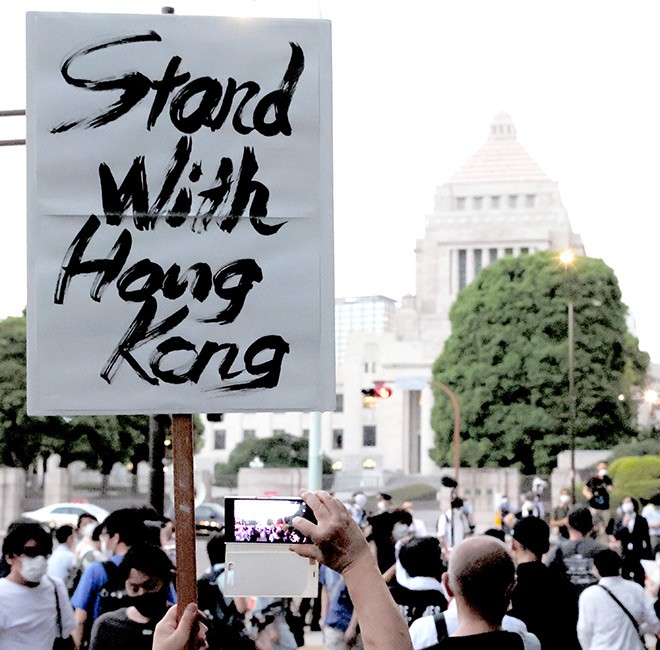 Citizens carrying placards in front of the Diet building in Tokyo's Chiyoda Ward on Aug. 12 protest the arrests of pro-democracy activists in Hong Kong. (Tsubasa Setoguchi)

Citizens took to the streets of Tokyo on Aug. 12 to support Hong Kong pro-democracy activist Agnes Chow and others who have been arrested by police on suspicion of violating China’s new national security law.

About 100 demonstrators, including young people and company employees, gathered in front of the Diet building in the early evening. The same day, a group of Diet lawmakers released a message criticizing China for the pro-democracy arrests in Hong Kong.

The demonstrators said they felt a strong sense of crisis that the common values of freedom and democracy are threatened and asked the Japanese government to take action.

A citizens group was hastily formed by people who are concerned about the human rights situation in Hong Kong and called for the rally.

Minoru Ide, 40, the group's leader, said, “The Hong Kong issues are not someone else’s problem. We should speak up against it together.”

Yuki Ishijima, 45, a part-time worker, learned of the protest via Twitter and took to the streets with her friend.

“Hong Kong people are fighting to protect their freedom and democracy,” she said. “Such values are important for Japanese, too. I want to fight together with them even though we live in different countries.”

Ishijima added, “The Japanese government should criticize the arrests of pro-democracy activists and show a firm stance.”

Chow had been sending messages on the dire situation and crackdown in Hong Kong to Japan in fluent Japanese.

Freelancer Shoko Fujimoto, 35, took part in a demonstration for the first time in her life.

“As a Japanese receiving the messages from Chow, I wanted to do something,” she said. “I would like the Japanese government to extend the visas of Hong Kong people staying in Japan.”

A cross-party group of Diet members who met at the Diet on Aug. 12 called for protecting the freedom and rights of Hong Kong citizens.

In the declaration, the members pointed out that after the national security law was implemented at the end of June, “local authorities have started to arrest activists who are seeking freedom and democracy in Hong Kong one after another.”

The declaration also said, “We ask the Chinese government to fulfill its duty to protect the autonomy and the freedom of Hong Kong people based on the principle of one country, two systems.”

(This article was written by Yuji Masuyama, Kae Kawashima and Ryuichi Yamashita.)