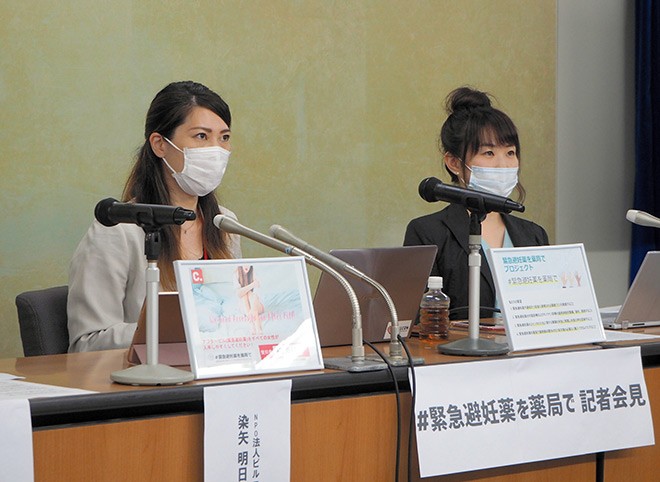 With an increasing number of young women having unwanted pregnancies during the COVID-19 pandemic, a citizens group is demanding that emergency contraceptive pills be made available over the counter.

The group, named "Kinkyu-Hininyaku no Yakkyoku deno Nyushu o Jitsugensuru Shimin Project" (Citizens' project to realize purchase of emergency contraceptive pills at pharmacies), submitted its request to health minister Katsunobu Kato in July, along with 67,000 signatures collected on a petition.

"Young people are being troubled during the coronavirus outbreak, so quick countermeasures are necessary," said Asuka Someya, co-leader of the group. "We will share the voices coming from people calling for improvement."

Taken within 72 hours of sexual intercourse, emergency contraceptive drugs have a high probability of preventing unwanted pregnancies. They can be purchased at pharmacies without a prescription in more than 90 nations, including the United States and France, according to the group.

But a physician's prescription is required in Japan.

Although the health ministry last year decided to allow contraceptives to be prescribed through online diagnoses, only women who do not have nearby medical institutions to visit or cannot see doctors for psychological reasons can use the service.

That is due to the belief that making the mechanism readily accessible to anyone will keep people from taking other measures to avoid pregnancies.

In its request, the group notes women often give up on using anti-pregnancy drugs, and that unsafe emergency contraceptives are sold online. It demands that not only emergency agents should be sold without a prescription but also that systems be introduced so women can visit doctors more easily in person and online.

The group started the online petition drive in 2018 and plans to continue the campaign.

Behind the move is the growing number of complaints from young women during the novel coronavirus pandemic.

A nonprofit organization called Pilcon, which deals with sexual health among young people, said it received 641 reports about unwanted pregnancies, sexually transmitted diseases and other sex-related issues through July 19, compared with 179 and 463 for 2018 and 2019, respectively.

According to Pilcon, the number of reports about pregnancies and contraception from teens more than doubled since March, when schools were temporarily closed to contain the virus, from the monthly average between September 2019 and February 2020.

Pilcon believes the trend is attributable to the fact that children are spending more time at home without adults, as well as their growing stress levels while self-isolating.