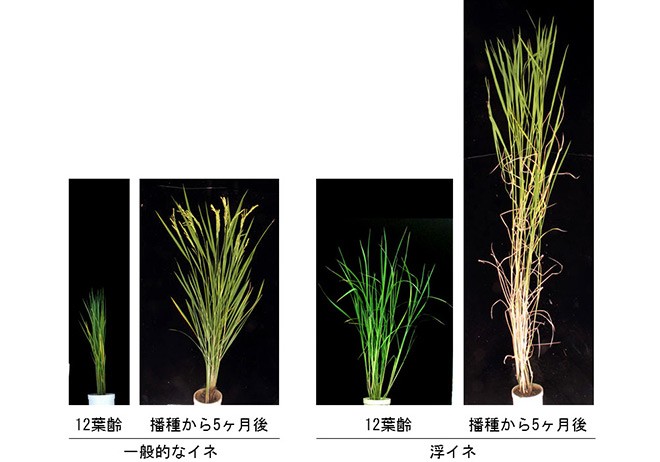 Young Japanese rice, far left; its grown counterpart, second from left; a young floating rice species, second from right; and matured floating rice, far right. Their stems extend differently, depending on the activities of certain genes and a hormone. (Provided by Nagoya University)

NAGOYA--The growth of rice stems is controlled by two genes that work like gas and brake pedals, researchers here have discovered, a finding that could lead to the birth of a new flood-resistant, productive crop.

A team of scientists primarily from Nagoya University said the gene-balanced growth mechanism is common among other grass families, including wheat and sugar cane.

The stem of the japonica rice variety raised in Japan is only 1 meter tall, while the stem of the floating rice breed cultivated in Southeast Asia stricken by flooding during the rainy season grows to 6 meters or so.

"The discovery never would have been made if we had studied only domestic rice, and comparing it with the floating species made the finding possible," said Motoyuki Ashikari, a plant molecular genetics professor at the university. "Looking into the diversity of rice enabled ascertaining the universal mechanism of stem growth."

A plant hormone called gibberellin is known to promote stem growth, but the Japanese species doesn't extend further even though gibberellin is added when it's young.

Keisuke Nagai, an assistant professor of plant molecular genetics at the university, and his colleagues examined the genes of both japonica and floating rice breeds, and identified differences in genes known as ACE1 and DEC1.

ACE1 acts as an accelerator in stem development, while DEC1 provides the brake, according to the researchers.

ACE1 doesn't function properly in the Japanese species, but a gene with a similar ability to ACE1 is activated in the maturation period to work with gibberellin to extend the stem. The activity of DEC1 is released as rice grows.

In the floating rice, DEC1's braking function is released by ACE1 and gibberellin in earlier stages, resulting in a rapid stem growth, according to the team.

In Japan, rice with longer stems can't survive wind and other elements, which leads to reduced production. The scientists believe that farmers long selected only short-stem breeds with broken ACE1 for improvement.

The team's findings were published in the scientific journal Nature. Readers can view them at (https://www.nature.com/articles/s41586-020-2501-8).