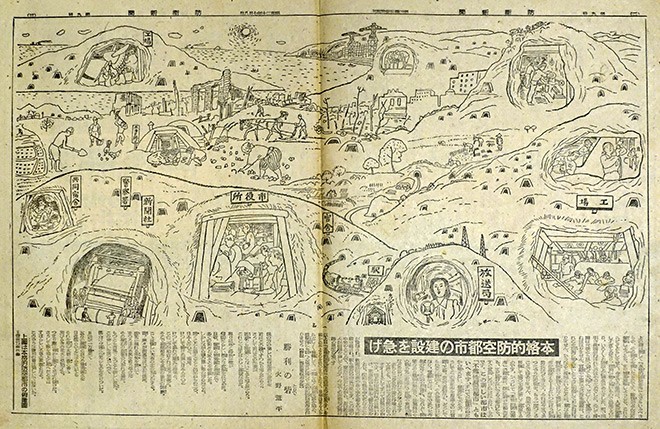 This two-page spread in the July 8. 1945, issue of the Defense Newspaper shows what an underground city in wartime would look like. (Yasuji Nagai)

Wartime residents of Kyushu in southern Japan got tips on how to kill U.S. paratroopers with bamboo spears courtesy of a publication that left no doubt about the dire situation the nation faced as World War II was coming to an end.

Copies of the special edition published in the waning days of the conflict included information on how to dig a trench, engage in guerrilla tactics by attacking enemy tanks with Molotov cocktails and identify enemy aircraft.

The first issue of the Defense Newspaper was published on April 18, 1945, by the Kyushu head office of The Asahi Shimbun.

It was created under the guidance of the Kyushu regional defense headquarters comprising local regional commands of the Imperial Japanese Army and Navy as well as local government offices.

The Defense Newspaper was in a four-page format issued on the 8th, 18th and 28th of each month.

The first issue coincided with increasingly intense fighting in Okinawa further to the south as fears grew that warfare would shortly shift to the main Japanese islands.

One objective of the Defense Newspaper was to prepare residents of Kyushu for a possible invasion, given the likelihood that the main southern island would be the next target of U.S. forces once Okinawa was overwhelmed.

The inaugural issue carried a message from Wataro Yoshinaka, a lieutenant general in the Imperial Japanese Army, exhorting residents to cooperate with the military.

"Combat on the main islands will be the final battle and there will absolutely be no next battle," Yoshinaka wrote. "You have no idea how much strength we receive knowing that the 10 million or so residents of Kyushu are together with us."

The articles in the Defense Newspaper carried headlines intended to convince residents it would be easy to destroy U.S. aircraft and artillery.

Another article about defending against paratroopers suggested throwing grenades from personal trenches dug in the ground and then using bamboo spears against the soldiers after they hit the ground.

But after firebombing raids over Kyushu intensified, the eighth issue published on June 28 contained tips on protecting one’s home and business against aerial attacks.

The issue of July 8 left little doubt about the desperate situation Kyushu was facing. It included a two-page layout detailing how to construct an underground city by moving everything from local government offices, radio stations and factories underground.

Novelist Ashihei Hino, known for his wartime novel “Mugi to Heitai” (Wheat and soldiers) and other works, contributed a poem that said in part that the underground city would be the “fortress for eternal victory.”

Space was left next to the masthead so all neighborhood households could stamp their family seal to indicate they had read the issue.

Rare surviving copies of the first 10 issues published between April and July 1945 that emerged on an internet auction site in autumn 2019 were scooped up by Hiroaki Ogi of Funabashi, Chiba Prefecture.

Ogi, 40, is a researcher with a group trying to grasp wartime mass control techniques used by military authorities.

No copies of the Defense Newspaper have been found in Asahi Shimbun archives, and no mention was made of the publication in the company history.

Only the first three issues remain in the National Archives of Japan and almost no copies can be found at the National Diet Library or other libraries.

"The desperate situation of the times is transmitted from the newspaper," Ogi said. "I also felt some fear because I could sense the greater pressure on the public to work together with the military, which was increasingly calling for combat on the main islands.”

Ken Fujimori, a former journalism professor of Senshu University in Tokyo who was involved in a series of articles about the role of the print media during the war as a senior staff writer at The Asahi Shimbun, noted that the newly discovered copies of the Defense Newspaper showed how closely the newspaper worked with the military to serve as its mouthpiece in the final months of World War II.

Fujimori, pointing to the media's responsibility to monitor those in power and provide information helpful to readers, said Japanese media in general, including The Asahi Shimbun, are weak when faced with the reality of established facts.

“The articles about firebombs or digging trenches come off as being very strange when viewed today, but it was very necessary information for readers of the time who were constantly facing bombing attacks,” he said.

“The newspaper provides a valuable lesson because it shows how the newspaper ended up after giving up on one ideal (of monitoring those in power) and only pursuing the reality being faced by the public.”