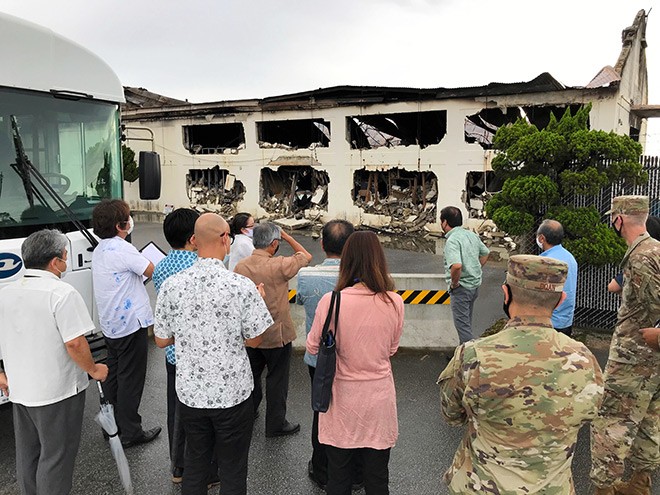 Local officials tour the U.S. Kadena Air Base in Okinawa Prefecture after a June 22 fire that leaked chlorine gas and injured more than 100 people. (Provided by the PR office of Kadena Air Base)

NAHA--Three civilian Japanese workers were among dozens of people at a U.S. military base in Okinawa Prefecture affected by a toxic blaze at a storage facility for hazardous materials, further fueling local anger at perceived slipshod procedures in such facilities.

Chlorine gas leaked during the blaze at the U.S. Kadena Air Base here on June 22. The three Japanese workers complained of sore eyes and other symptoms, according to the Defense Ministry’s Okinawa Defense Bureau.

Two days after the incident, U.S. military authorities revised its initial statement that about 45 people were affected and said 100 or so people at the base had experienced sore throats or eyes. It made no mention of Japanese workers having been affected.

After Japanese defense officials made later inquiries, they were informed that three Japanese were among those at the base who were affected. However, U.S. authorities insisted their symptoms were not severe.

They also stated that most of the 100 or so people affected by the fumes were only mildly injured.

Japanese defense officials asked U.S. military authorities to check for themselves whether anybody was severely injured following an inquiry from The Asahi Shimbun.

They then learned that a firefighter at the base was temporarily treated in an intensive care unit on the base. The firefighter apparently has since recovered, officials said.

Information provided by the military was often inaccurate and local officials were not notified of the incident in a timely manner.

The fire occurred around 8:50 a.m. But the Kadena town government did not get word of the incident until around 11:30 a.m. when the Okinawa Defense Bureau got in touch.

Ten hours passed before town officials were notified that chlorine gas had leaked.

But hours earlier, at around 2 p.m., the U.S. military posted news of the incident in English on its official Facebook site.

It urged military personnel to contact a doctor immediately if they experienced eye or respiratory problems.

"The fire was burning in front of us, but we didn’t have information about what is going on inside the base," said a local government official who witnessed the blaze. "We couldn’t even make a decision about whether we needed to evacuate (residents in the area)."

Under the terms of the Japan-U.S. Status of Forces Agreement, the U.S. military is obliged to notify the Okinawa Defense Bureau immediately of any incident or accident on its bases.

While fire is not specifically mentioned in the agreement, the Foreign Ministry in Tokyo said the rule applied to the toxic blaze incident in June.

The less-than-forthcoming response from U.S. authorities only served to exacerbate local anger at the massive U.S. military presence in Okinawa Prefecture.

"The fire occurred at a facility for hazardous materials," fumed Tsuyoshi Ura, who lives near Kadena base. "Then why did they not issue a warning to people living outside the base? Are we invisible to those behind the fences?”

The fire was not visible from where Ura, 59, lives. He only learned the news through an announcement by city authorities.

Ura also recalled an unusual incident about a week before the fire. Residents noticed a foul smell coming from a river near Ura’s home. It turned out that human sewage was inadvertently released into the river during work on the base to repair a bilge pipe.

The toxic blaze only added to local anger about the way the U.S. military conducts itself in Japan. A big local story that has made national headlines concerns a large number of COVID-19 infections spreading inside the base since July.

Residents are more distrustful than ever about the commitment by U.S. authorities to fully disclose information in a timely manner on anything that could possibly impact the local community.

“It’s hardly new for us to have a sense of distrust against the (military),” Ura said. “But I feel so helpless about the fact that we local people are always the ones who have to live side by side with invisible dangers like toxic materials and the new coronavirus.”