EDITORIAL: Japan in danger of losing all that it gained after a disastrous war 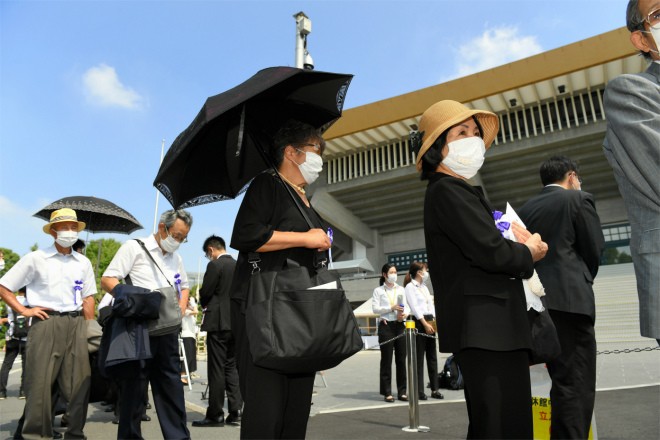 Participants line up to enter the Nippon Budokan hall in Tokyo on Aug. 15 to attend the annual memorial ceremony to mark the end of World War II. (Ryo Kato)

As it suffered the ravages and horrors of war beyond description, this nation learned the absurdity of war and the preciousness of peace.

The Japanese people vowed never to repeat the mistake and committed themselves to transforming their nation into a democratic society.

Japan embarked on remaking itself from a nationalist country where the people were supposed to serve the state into a democratic society where the people make decisions about the course of their nation as the holder of sovereign power.

We need to ask ourselves some questions about this metamorphosis. How much progress have we made in this reform? Has Japan become a society where people are respected equally as individuals?

This year, the world is grappling with the new coronavirus pandemic, which has raised serious questions about human security. In these times of great uncertainty and anxiety about the future, we need to take a fresh look at where Japan stands right now.

The history of Ninoshima, a small island in the Seto Inland Sea of about 750 people off Hiroshima Port, reflects the ups and downs in the fortunes of modern Japan.

During the First Sino-Japanese War in the late 19th century, Japan became the first modern nation to install significant border control measures to prevent the spread of infectious diseases. A facility to quarantine and isolate returned soldiers was set up in Ninoshima island.

As Japan expanded its invasion of the Asian continent, the facility was enhanced. As Japan embarked on its second war with China and then declared war against the United States, Japanese forces were stretched to the limit. By that time, none of the Japanese soldiers returning home from overseas battlefields were subjected to quarantine.

On Aug. 6, 1945, the year the war ended with the defeat of Japan, more than 10,000 residents with horrific burns from the atomic bomb detonated over Hiroshima were shipped to the unused quarantine facility in Ninoshima.

"All we could do was to secure space for each of the blackened, dying people who flooded the facility to lie on their backs," Mitsuru Suzumura, an army surgeon, wrote in his journal, "Ninoshima Genbaku Nisshi" (Ninoshima atomic bomb journal). This is a grueling description of the appalling tragedy that unfolded at the facility that day.

Goto established himself in the field of medicine and contributed to the modernization of Japan's medical and public health systems with his progressive vision.

One famous phrase he coined is "jichi sanketsu," which means three moral principles of "not being taken care of by others, taking care of others and not seeking rewards."

Goto was a brilliant administrator dedicated to promoting people's health and independence. What would he have thought about Japan's reckless war, which led to national catastrophe?

The pandemic has prompted some political leaders to reach for the analogy of war. French President Emmanuel Macron declared his country was "in a state of war," while Chinese President Xi Jinping described his country's battle against the virus as a "people's war" in an apparent attempt to stir up the nation's collective psyche.

It is not uncommon for politicians to try to bolster their leadership by using fiery rhetoric when society is filled with anxiety or discontent.

History shows, however, that it is all the more important in such times for people to pay close and intense attention to the political process and rigorously monitor and assess what their leaders are doing.

Hannah Arendt (1906-1975), a German-born American philosopher, argued that the "banality of evil," by which she meant the inability of average and mundane people to think for themselves, supported Nazi Germany's unspeakable crimes. Much the same can be said of Japan at that time.

"While thinking that things have become really serious, I also felt a sort of sense of being liberated," Shinpei Ikeijima (1909-1973), an editor at Bungeishunju magazine, wrote about his emotional response to Japan's attack on Pearl Harbor in his book "Zasshi Kisha" (magazine reporter).

Japan started the war against the United States despite the murky and bleak outlook of its war with China. Amid a disquieting sense of uncertainty, Ikejima, while recognizing the recklessness of the war, wrote that he felt the attack "at a single swoop broke my mood of depression coming from a feeling of being kept down."

It was an era when freedom of speech was brutally suppressed by the militarist government with the notorious Peace Preservation Law and other instruments. The military controlled information, while news media, including The Asahi Shimbun, failed to report facts. The Japanese people were gripped by fanatical nationalism without knowing much about what was happening.

The principles of Japan's postwar democracy, which respect people as individuals, are a social safety system built on the bitter lessons of the war.

The coronavirus crisis is also testing the ability of individuals to think for themselves. To be sure, a certain degree of unified behavior among members of society is necessary to prevent the spread of infections. Ultimately, however, what really matters is action by each individual based on his or her own conscience

The importance of people's independence and consideration for others preached by Goto, who established Japan's quarantine system, is still relevant for today's society.

The primary duty of the government in light of current circumstances is to provide timely information and facts so people can grasp what is happening and act on their own. Talking about the outbreak in emotional language serves no purpose.

ABE ADMINISTRATION TURNING ITS BACK ON CONSTITUTION

In the world today, there are both free societies which embrace diversity and authoritarian societies which force uniformity and conformity on their members. It is distressing to see the grim reality of the United States and China locked in a fierce battle for global hegemony, dubbed the "new Cold War."

Despite all the uncertainty surrounding the global landscape, however, there are no calls on Japan to compromise its principles of freedom and democracy.

The nation's Constitution states that the Japanese people "resolved that never again shall we be visited with the horrors of war through the action of government" and "do proclaim that sovereign power resides with the people."

It can safely be said that the postwar national credo, which combines a pledge of the renunciation of war with democratic tenets, has been widely accepted by the Japanese people.

The government, however, appears to be turning its back on these principles.

The administration headed by Prime Minister Shinzo Abe has taken a series of actions that indicate blatant disrespect for the Diet.

Instead of disclosing information necessary for the well-being of the people, the administration has abused its power in ways that have gone so far as to falsify official documents and cover up inconvenient facts. These acts amount to nothing but debasement of the principle of popular sovereignty.

We need to keep asking ourselves one important question while handing down memories of the war through generations and tackling all the tough challenges posed by the new era.

How much progress have we made in our efforts to build a truly democratic nation, a process that began 75 years ago, when Japan made a fresh start as a nation?