Okinawa raises COVID-19 alert due to change in infection routes 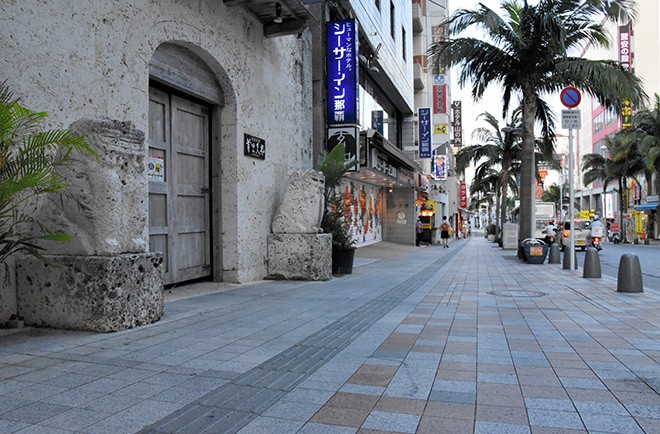 Many businesses in a popular tourist destination of Naha remain closed Aug. 14 due to concerns about the novel coronavirus pandemic. (Tsukasa Kimura)

NAHA--Authorities in Okinawa raised the alert level concerning the novel coronavirus pandemic to the highest stage on Aug. 13, but stopped short of asking people from elsewhere to refrain from visiting the southernmost prefecture.

A key reason for the upgrade concerns a change in infection routes of those who test positive for COVID-19.

The prefectural government had set seven benchmarks to measure the spread of infections and the effect they are having on the prefecture’s medical care structure.

By Aug. 14, six of the benchmarks had reached stage four, meaning infections were spreading in the prefecture.

Okinawa Governor Denny Tamaki urged residents to shop alone, not accompanied by family members, but did not issue a request for out-of-prefecture visitors to stay away.

The prefectural government analyzed infection routes in cooperation with the National Institute of Infectious Diseases.

Between July 8, when Okinawa recorded its first new COVID-19 case in about two months, and July 31, when the prefectural government issued its own state of emergency, 209 of the 286 new cases were traceable.

Almost half of them were infected after visiting entertainment districts at night, while 6.7 percent of the cases could be traced to outside Okinawa.

Between Aug. 1 and Aug. 10, of the 545 patients whose infection routes were tracked, 26.8 percent had visited entertainment districts at night, 20.4 percent were infected as a result of the family environment and 15.6 percent through meals with others. Only 1.7 percent of the cases could be tracked to outside the prefecture.

A continuing headache for the Okinawa prefectural government is a lack of information about U.S. military personnel who have been confirmed with COVID-19.

According to the Okinawa prefectural government, there have been 328 infections among U.S. military personnel at seven bases in the prefecture since July 7.

Because the U.S. military has not provided information about where those infected individuals live or their actions outside of bases, the prefectural government has no idea whether Okinawa residents are also being infected.

(This article was written by Shinichi Fujiwara and Tsukasa Kimura.)