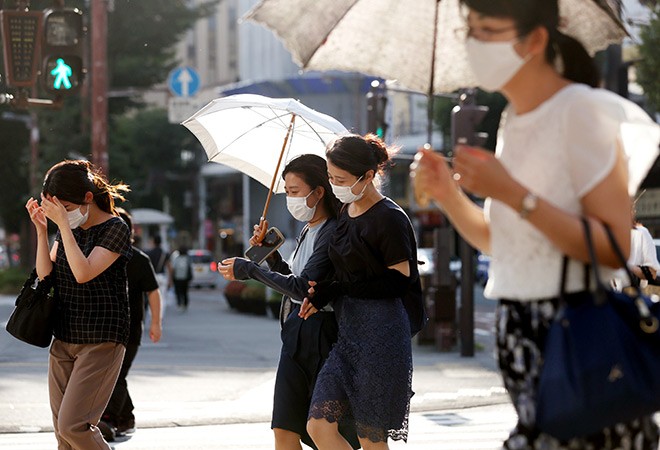 Pedestrians walk in Hamamatsu, Shizuoka Prefecture, on Aug. 17. The city recorded a high of 41.1 degrees, tying the nation's highest temperature on record. (The Asahi Shimbun)

The mercury hit a blistering 41.1 degrees in Hamamatsu, Shizuoka Prefecture, on Aug. 17, tying the nation’s all-time high, according to the Japan Meteorological Agency.

The high was reached at 12:10 p.m. The highest temperature was previously recorded in Kumagaya, Saitama Prefecture, in July 2018.

In Hamamatsu, the temperature rose to 40.9 degrees on Aug. 16, the previous high in the country this year, according to the JMA. The agency is calling on people to be on the alert against heatstroke.

Of 921 locations across the nation, 245 recorded temperatures of 35 degrees or higher that day.

Temperatures are also expected to reach the same blistering levels in Tokyo, Osaka, Nagoya, Fukuoka and other areas on Aug. 17 with daytime highs of 39 degrees forecast in Nagoya and Kyoto.

The Tokyo metropolitan government fire department said 214 people were rushed to a hospital by an ambulance for symptoms of heatstroke in Tokyo, excluding Inagi and islands south of the capital, as of 9 p.m. on Aug. 16.

The patients include men and women ranging in age from 6 to 99, with six of the cases life-threatening and 15 in serious condition, according to the fire department.

In Tokyo’s Setagaya Ward, a wife noticed that her husband in his 80s was unconscious on futon bedding at home around 5:40 a.m. the same day. The man was suspected of having heatstroke and taken to a hospital with no vital signs. His bedroom reportedly did not have air conditioning.

The fire department said there have been many cases of people getting heatstroke indoors between late at night and early in the morning. It is advising people to use air conditioning and hydrate frequently, especially before going to bed.