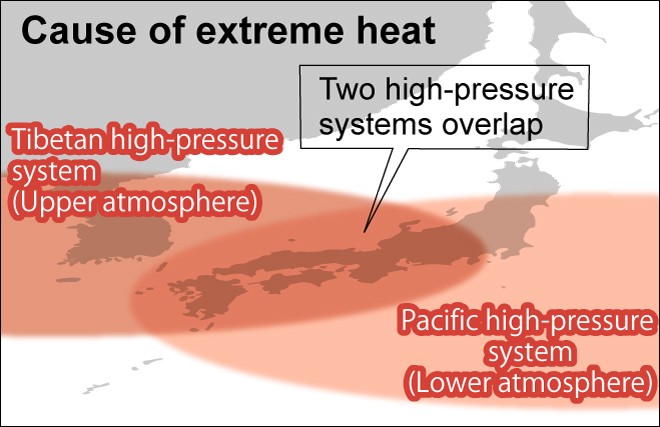 Two high-pressure systems overlapping over the Japanese archipelago brought down scorching heat nationwide on Aug. 17, raising temperatures in some parts of Japan to record levels, according to the Japan Meteorological Agency.

And it looks like the heat will be on for some time.

Temperatures hit nearly 40 degrees across the country that day with Hamamatsu, Shizuoka Prefecture, tying the country’s all-time high of 41.1 degrees at 12:10 p.m. Out of 269 locations around the country, 26 logged their highest temperatures on record as of 4:50 p.m.

Due to the prevailing westerlies moving northward, the Tibetan high-pressure system is spreading eastward, covering the area around Japan, the JMA said.

Since that prevents clouds from forming, the amount of solar radiation also increases, making temperatures rise even further near the ground, according to the JMA.

The JMA said the mercury soared on Aug. 17 from the Kyushu to Chubu regions, where the two high-pressure systems overlapped and likely caused the record-tying high temperature reported that day in Hamamatsu, which is located in the Chubu region.

The sweltering weather is expected to continue at least until the end of this week. But a one-month forecast by the JMA suggests extreme heat is likely to persist even in September.

(This article was written by Takaoki Yamamoto and Yosuke Takashima.)