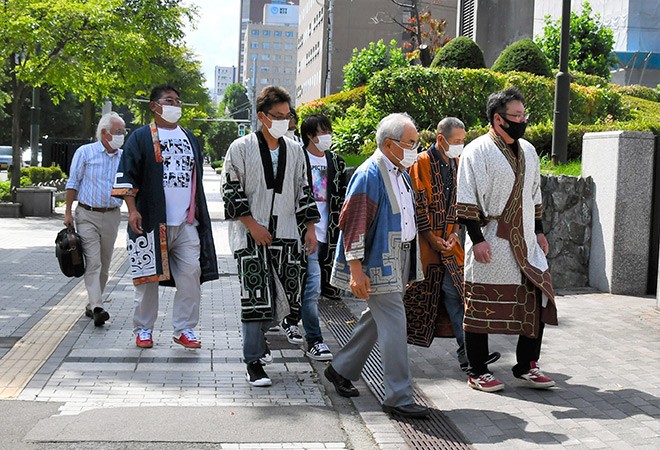 Ainu plaintiffs enter the Sapporo District Court to file a lawsuit over fishing rights for salmon in a Hokkaido river on Aug. 17. (Yuta Kayaba)

SAPPORO--A lawsuit filed by a group of indigenous Ainu over fishing rights is effectively a test case aimed at confirming rights to land and natural resources that the ethnic minority had traditionally monopolized, according to lawyers for the plaintiffs.

The suit filed at the Sapporo District Court on Aug. 17 calls on the central and the Hokkaido prefectural government to restore rights to fishing for salmon in a local river for commercial purposes.

At present, Ainu can fish for purely cultural reasons based on permission granted by prefectural authorities.

The lawsuit is the nation’s first such legal action aimed at resolving issues relating to a lifestyle of Ainu that prevailed before the Meiji Era (1868-1912).

The plaintiffs are from the group based in Urahoro, eastern Hokkaido, that calls itself the Raporo Ainu Nation.

According to court documents, most of the plaintiffs are descendants of Ainu who lived in communities close to the Urahorotokachi river during the Edo Period (1603-1867).

They said their ancestors made a living by catching salmon in the river in exchange for goods until the central government imposed a ban on salmon fishing during the early part of the Meiji Era.

The plaintiffs argue that the ban has no legal grounds and that they have a right to catch salmon using gill nets within a range of 4 kilometers from the mouth of the river.

Under the current setup, Ainu people must gain permission from the Hokkaido governor to catch salmon, which is granted only when the activity aims to preserve their cultural heritage.

The lawsuit calls for Ainu to catch salmon as a commercial activity.

Their right to do so, they argue, lies in a declaration on the Rights of the Indigenous Peoples adopted by the U.N. General Assembly in 2007.

The U.N. declaration states that each government is obliged to acknowledge and protect the rights of indigenous people. Japan voted in favor of the declaration.

The plaintiffs maintain that the Japanese government has an obligation to recognize and protect their indigenous rights as a member of the global community.

An official with the Fisheries Agency’s resources management department declined to comment on the suit.

“We cannot comment now as we are not aware of details of the lawsuit,” the official said.

The Ainu, who inhabit primarily Hokkaido and nearby regions, had their own language and distinctive culture before they were forced to assimilate.

(This article was written by Yuta Kayaba and Fumiko Yoshigaki.)