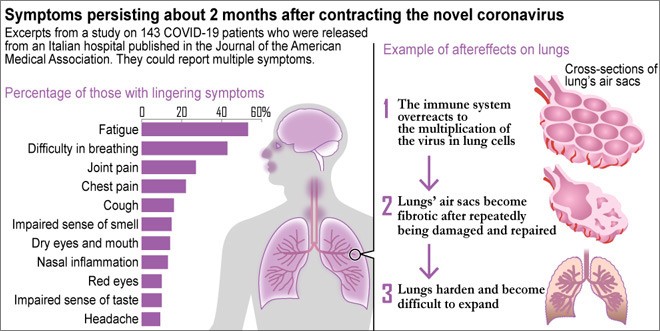 More than three months after testing positive for the novel coronavirus, a teenage male student in Chiba Prefecture still is experiencing symptoms.

As of mid-July, he still felt lethargic and had a persistent fever, headache and chest pain, and occasionally developed a rash.

“I thought the symptoms would disappear in around two weeks after I tested negative for the virus,” he said. “I’m worried that this might continue forever.”

After testing positive, he had to wait 20 days at home before being admitted to a hospital since there were no beds available. He was discharged from the hospital about two weeks later and stayed at a hotel and his home to recuperate.

But he was hospitalized again in June as his condition did not improve. He returned home after being released from a hospital but sees a doctor when his symptoms worsen.

He said he aims to return to school in autumn, but he is not sure whether he will be fit enough to do so.

The teen is among many people who contracted the novel coronavirus and continue to experience fatigue, difficulty in breathing and other symptoms even after they were deemed to have recovered.

Although little is known about long-term effects of COVID-19, many suspected cases of “aftereffects” have been reported both in and outside Japan. The health ministry decided to launch a study on the matter from August.

More than seven months have passed since the spread of viral pneumonia from an unknown cause was reported in the Chinese city of Wuhan. The long-term effects of the novel coronavirus remain unknown since it is still a new disease, but reports of its aftereffects have surfaced around the globe.

On Twitter, some users posted messages with the hashtag “corona aftereffects,” complaining of an intermittent fever, dizziness, fatigue and an impaired sense of taste and smell.

A group of doctors at a hospital in Italy published results of its study on 143 patients who were discharged from the hospital after recovering from COVID-19 in the Journal of the American Medical Association in July. The study found that nearly 90 percent of them still had some symptoms.

The patients were asked about their conditions two months on average after they developed symptoms. Eighty-seven percent said they are suffering from one or more symptoms, such as fatigue and difficulty in breathing.

The most common symptom was fatigue with 53 percent of them saying they felt it, followed by difficulty in breathing with 43 percent, joint pain with 27 percent and chest pain with 22 percent.

Some of the patients complained of a cough and an impaired sense of smell. Fifty-five percent said they have three or more symptoms.

“The study involved only a small number of patients at one hospital,” said one of the doctors. “We need to keep monitoring the long-term effects of COVID-19 on patients after they are discharged from a hospital.”

According to local media, the Italian Respiratory Society also reported in May that 30 percent of COVID-19 patients who recovered from the disease could suffer from aftereffects.

The report is based on data on severe acute respiratory syndrome (SARS), which is caused by another type of coronavirus, and COVID-19 cases in Italy. Survivors of the novel coronavirus have a risk of aftereffects on their lungs for at least six months, the report said.

Researchers have long pointed out that COVID-19 damages survivors’ lungs. A group of doctors at a hospital in Wuhan reported that many ground-glass opacities were found in CT scan images of lungs of patients who were hospitalized for COVID-19 between January and February and later discharged.

In June, another group of doctors at a hospital in Guangzhou, China, published its findings on the lung functioning of 110 COVID-19 patients who were released from the hospital, excluding those with serious symptoms, in the European Respiratory Journal.

The results showed about 47 percent of the patients had abnormalities in their lung functioning and roughly 25 percent could only take in a small amount of air in their lungs despite having normal blood oxygen levels when they left the hospital.

The more severe the patients’ symptoms, the more serious the damage to their lungs, said the doctors.

According to Yasuhiro Setoguchi, a specially appointed professor of respiratory medicine at Tokyo Medical and Dental University, some patients who recovered after becoming seriously ill said that they run out of breath climbing stairs and that hampers their efforts to return to society.

Fibrosis of the lungs is thought to be the cause of such impaired lung functioning.

When a virus infection triggers the cytokine storm, in which immune reactions to infections run out of control, the walls of tiny bags in lungs, called air sacs, become damaged. According to Setoguchi, air sacs try to repair the damage, but they cannot completely recover from it, becoming fibrotic.

Air sacs let the air in and out by expanding and contracting. Having many fibrotic air sacs makes it difficult for lungs to expand like inflating a thick rubber balloon, said Setoguchi.

The aftereffects of COVID-19 are not limited to damage to lungs.

Masamitsu Sanui heads the intensive care unit at Jichi Medical University Saitama Medical Center. He said patients who were admitted to an ICU after developing serious pneumonia can, in general, experience reduced cognitive functioning, including memory and attention, or develop depression or post-traumatic stress disorder (PTSD) in addition to decline in lung functioning.

One published study found that about 20 percent of patients who suffered from acute respiratory distress syndrome (ARDS), which is caused by serious pneumonia and other factors, became depressed one to two years after their recovery, said Sanui.

ARDS can also occur after COVID-19 patients develop severe pneumonia. A combination of factors, including the cytokine storm, impaired consciousness called delirium and hypoxia, is believed to contribute to the development of depression after recovery from ARDS.

“The novel coronavirus can also cause similar aftereffects,” said Sanui. “(COVID-19 patients with serious pneumonia) tend to require long hospitalization in an ICU, so we need to pay more attention to such cases.”

GOVERNMENT TO STUDY AFTEREFFECTS OF COVID-19

Reports of suspected aftereffects prompted the health ministry to start a study on the long-term effects of COVID-19 on some 2,000 patients who recovered from it from August.

The ministry will collect data from 1,000 moderate to serious patients on their subjective symptoms and lung functioning at two times: three months and six months after they were discharged from hospitals.

It will also survey 1,000 mild to moderate patients about their symptoms persisting after being released from hospitals and conduct blood tests on them.

The ministry has recently set up a research team and plans to continue the study until March next year to help develop measures to prevent the aftereffects and treatment for the symptoms.

(This article was written by Hiromi Kumai, Hajime Mikami and Roku Goda.)