Under age 60? You’re too young to play in this gamer’s arcade 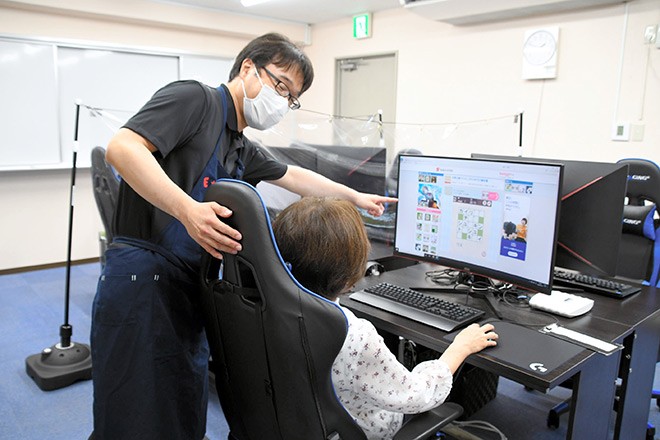 Koji Nashimoto plays a video game of puzzles with a member of the ISR e-Sports arcade in Kobe’s Chuo Ward on July 14. (Minami Endo)

KOBE--The video arcade has been stripped of its time-honored status as the exclusive domain of the rebellious teen.

At its latest iteration here, teens can't get past the front door.

ISR e-Sports in Kobe's Chuo Ward is a seniors-only arcade for esports, or competitive computer games.

Electronic sports have been attracting attention for their effectiveness in preventing dementia and isolation of elderly citizens, and a public sector trial program to introduce them into nursing homes has begun.

One recent day, Koji Nashimoto, who opened the facility in July, was busy teaching a female member how to play a game.

“The drawing game I played last time was a little hard,” said the woman, 65.

“Let’s start today, then, with reviewing how to go online,” Nashimoto told her. “Select ‘login,’ enter your password ...”

Despite her difficulties, the woman sounded positive about the experience.

“I used to play sudoku and other puzzles on a tablet computer at home, but playing alone was no fun,” she said. “Here, you can learn new games, and you have opportunities to get to know new friends.”

ISR e-Sports touts itself as an esports arcade for seniors, with memberships limited to those at least 60 years old. Equipped with six big personal computers, the arcade offers extra-comfy chairs that induce little fatigue from sitting on them for a long time.

A fee of 1,000 yen ($9.47) entitles visitors to play games in the arcade for two hours, including 30 minutes of rest. The arcade also offers a chatting space set up with protective measures against possible COVID-19 infections.

Nashimoto also serves as the president of a staffing agency. He has long been troubled by the fact that few jobs are available for elderly job seekers who lack qualifications.

He said it dawned upon him one day while playing an esports game for fun that seniors with mobility problems could play similar games.

“I thought I could create more side job options for elderly people if I were to teach them esports and train them into being esports instructors,” Nashimoto said.

At the arcade, beginners can get lessons on how to use a mouse and start with simple games, such as a quiz, the game of go and mah-jongg.

Visitors are encouraged to go through steps to become familiar with esports, with an eventual goal of working at retirement homes and other facilities for elderly citizens as esports instructors.

“Esports may have the strong image of being played by young people, but I still believe there could be esports intended for maintaining health, just like in the case of other sports,” Nashimoto said. “I hope people will drop into our place if they are interested.”

The public sector is also setting its sights on the potential of esports at a time when the spread of the novel coronavirus means that nursing home residents have reduced opportunities to see visitors and fewer community events are being held.

The Kobe city government is tying up with Nippon Telegraph and Telephone West Corp. (NTT West), the telecommunications giant, and PACkage Inc., an Osaka Prefecture-based operator of esports events, to start a trial program for introducing esports into nursing homes.

The parties plan to install esports gear at nursing homes in Kobe to study if they could be used as tools for interactions among family members living apart.

They will also keep records of changes in the heart rates and body temperatures in residents playing esports to find out if playing the games will help prevent them from becoming frail.

The program will start in the coming winter and last through the end of fiscal 2021. An open competition will be held to call for participating businesses.

“We hope to start with games that are familiar to elderly citizens, such as go and shogi, and go on gradually to a broader variety of games, including Puyo Puyo (a tile-matching video game),” Kazuhiro Kawazoe, head of NTT West’s Hyogo Branch Office, told a news conference on July 17.

“It showed their brains were activated in the prefrontal area, which plays a key role in dementia prevention, and similar effects were observed in those who were watching the games at their side,” he said.

Shinohara, who is well-versed in the training of cognitive functions in the elderly, added: “Video games could help train brain functions that usually remain unused. Being a gamer could also have rehabilitative effects and facilitate memory consolidation.”