Japan survivors of COVID-19 say they face stigma, have ‘aftereffects’ 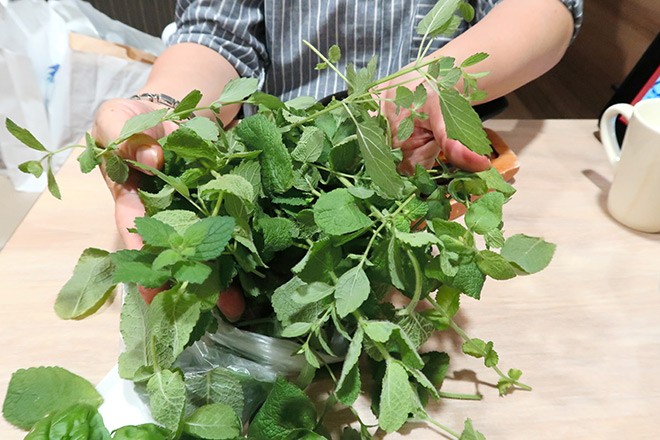 A woman who shared a room for COVID-19 patients with a reporter at a hospital gives the writer some mint she harvested from her kitchen garden when they met on June 27 after they were both discharged, but neither of them could smell its scent. (Yuri Imamura)

More than 50,000 people in Japan have tested positive for COVID-19 to date. Many have recovered, but others have lingering symptoms and face social stigma several months after being given the all-clear.

A reporter who is 38 years old and was hospitalized for two weeks after contracting the virus in March spoke with three COVID-19 survivors who shared the same room with the scribe about their lives after they were discharged.

One, a woman in her 60s, said she still suddenly feels tightness in her chest more than four months after she was released from the hospital.

“At first, I thought it might be an aftereffect of COVID-19, but it’s probably because of stress that I have to keep my infection secret,” said the woman, who works as a part-time staff member at an after-school childcare facility in Tokyo.

She also tested positive for the virus in March and was hospitalized for about two weeks. One month after she was discharged from the hospital, her doctor granted her permission to work, saying she had fully recovered from COVID-19.

However, as her boss told her to “stand by at home until the number of new infections decreases,” she was unable to go to work for another three weeks. She said she believes she was forced to stay home to avoid arousing others’ suspicions that she took time off because she caught the disease.

Her boss instructed her to “never tell anybody that you became infected.”

She said her boss told her that “some people will feel anxious if it becomes widely known that someone whose job is interacting with children tested positive.”

She then spent a whole day making phone calls to her friends and other people whom she told about her hospitalization to ask them not to discuss it with others.

The woman, who once worked as a teacher, kept telling her children and students to make sincerity and honesty as their guiding principles. But she has not publicly revealed her infection.

She said she can understand that her boss wants to avoid making parents and children worried.

“But I feel terrible when I think about how long I should keep lying about my infection since I’m in a position to teach children not to discriminate against others.”

Another COVID-19 survivor, 62, whom the reporter met at a family restaurant in Tokyo for the first time in about two months after being discharged, kept massaging her right upper arm with her left hand.

She said she sometimes has a sharp pain in the arm which she had never experienced before she contracted the virus. She went to multiple hospitals but could not identify the cause.

She has also been suffering from an impaired sense of smell ever since she became infected. She said she could not smell the scent of mint in June that she harvested from her kitchen garden and said she “still can’t fully smell it” when she met with the reporter in August.

The woman, who has bronchial asthma, initially received treatment for COVID-19 in a private room after being taken to the hospital by ambulance as she was classified as having serious symptoms.

She later moved to a room for patients with mild symptoms but was kept on a ventilator. Even after she was discharged at the end of April, she still could not speak properly as she continued to suffer from breathing difficulties.

She became able to resume working at a call center two months after being released from the hospital. But she said she was told not to report to work if she is coughing.

“I have asthma, so I can’t help coughing,” said the woman, expressing her puzzlement over the request.

Another COVID-19 survivor, 46, who runs a Tokyo restaurant, has kept sharing information on her symptoms, possible infection routes and other matters concerning her infection on social media to keep her regular customers updated since she developed symptoms.

She said she started to do so because she thought she “would lose their trust if I kept my infection secret.”

She was discharged from the hospital in April. Since she did not have major aftereffects from COVID-19, she started preparing for the reopening of her establishment.

But when she posted the news of the reopening on social media, some of her regular customers told her, “You got infected with the virus, so you should be more cautious about reopening” and “You have to present a certificate that you tested negative for the virus at the time of reopening.”

“That’s the kind of disease we contracted," she said. "But I don't want to let it faze me.”

She added that she intends to keep sharing her experiences about her infection with customers who choose to drop by her restaurant.