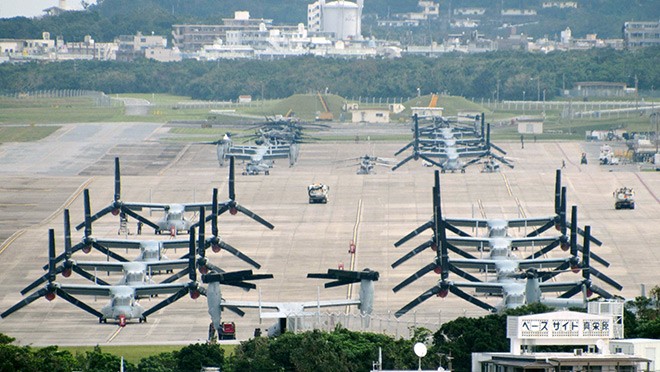 A group comprising the governors of 15 prefectures hosting U.S. military facilities called on the central government to ensure that the bases strictly adhere to Japanese quarantine procedures against COVID-19 as new cases continue to rise in those facilities.

The governors on Aug. 18 urged the government to secure the cooperation of the U.S. side on this issue by sending a written request to Foreign Minister Toshimitsu Motegi and Defense Minister Taro Kono.

The move was triggered by an incident in July when an American family of three arrived back in Japan and flouted Japanese regulations in their rush to reach the Marine Corps Air Station Iwakuni in Yamaguchi Prefecture, where they reside.

The family arrived at Tokyo’s Haneda Airport and were supposed to wait until the results of a polymerase chain reaction (PCR) test they took to confirm whether or not they were infected before continuing their onward journey to Iwakuni.

They stayed overnight at a local hotel and took a commercial flight to Iwakuni the next day. Their infections were confirmed later.

“They ignored Japan’s quarantine rules and moved on,” the written request by the governors said. “It should not have happened.”

The statement also urged the central government to bolster the quarantine system to prevent a similar incident from occurring in the future.

It also pressed for precautionary measures at U.S. military facilities in Okinawa Prefecture, where more than 300 U.S. personnel have tested positive for COVID-19 since July.

The governors also called on the central government to prompt the U.S. side to swiftly provide information on infected American personnel to local authorities, citing cases at a U.S. military facility in Kyotango in Kyoto Prefecture.